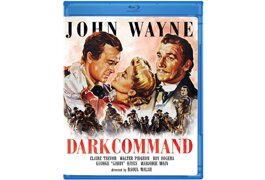 Olive, Western, $19.95 DVD, $29.95 Blu-ray, NR.
Stars John Wayne, Claire Trevor, Walter Pidgeon, Roy Rogers.
1940. Given a W.R. Burnett novel as its source plus direction by action specialist Raoul Walsh just before he began spending the next dozen years at Warner Bros., modest Republic Pictures probably felt justified shelling out $750,000 for its biggest production in a long time — though it always helps when there’s some financial return, which did materialize in this case. Though the casting headlines were John Wayne and his Stagecoach co-star Claire Trevor, there are some unexpected bonuses. One standout is the opportunity this epic affords to see Roy Rogers playing what used to be called a “young hothead.” And yet, the picture is finally stolen by Walter Pidgeon. For a Republic release that began showing up on TV when Eisenhower was still president, Olive’s is, visually speaking, a pleasing enough no-frills rendering that remains tightly spun over 94 minutes.
Read the Full Review

A Life of Her Own

Available through online retailers via Warner Archive
Warner, Drama, $18.95 DVD, NR.
Stars Lana Turner, Ray Milland, Louis Calhern, Tom Ewell.
1950. Nobody seems to be, or to have been, very crazy about this polished MGM soaper with Lana Turner cast as a fashion model — and this would include director George Cukor, who not for the last time would have the censors and studio suits on his tail over one of his movie’s content. If Life does fade some after act one, the Cukor hustling-bustling “business” in the model agency offices, nightspots and a horribly depressing women’s hotel is more than adequately kinetic to watch.
Read the Full Review