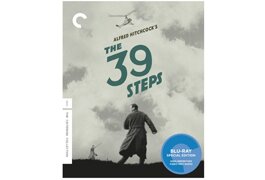 Criterion, Thriller, $29.95 DVD, $39.95 Blu-ray, NR.
Stars Robert Donat, Madeleine Carroll.
1935. This landmark is one of Alfred Hitchcock’s most emblematic and purely entertaining movies — an on-the-lam drama that toyed delightfully with some of the director’s later trademarks. These include the falsely accused protagonist (Robert Donat); a demure blonde for all seasons (Madeleine Carroll); a wild-goose-chase galore — including the early employment of Hitchcock’s famed “McGuffin” (or red herring plot point); and leaps in who-really-cares logic (as in the way Donat traverses an amazing amount of Scottish geography in remarkable little time while ankle-ing it away from a London murder charge).
Extras: This Criterion upgrade, which adds a new essay by Scottish critic David Cairns that tipped me off to these geographical leaps, is a very clean rendering of a now-elderly release whose negative has had to have spent its life being run through the printing ringer. Also carried over here from the standard DVD are an audio essay by Hitchcock scholar Marian Keane; a 1937 Lux Radio Theatre adaptation with Robert Montgomery and Ida Lupino; and a short documentary on British Hitchcock films. There are also original production design drawings, a pertinent excerpt from the famous 1962 Francois Truffaut Hitchcock interview and (a special treat) chunky excerpts from broadcaster Mike Scott’s hugely entertaining TV interview in 1966 (probably to promote Torn Curtain), by which time Hitchcock was starting to get used to belated artistic respect and even adulation.
Read the Full Review

Mary Pickford: The Muse of the Movies

Cinema Libre, Documentary, $19.95 DVD.
Narrated by Michael York.
2008. Perpetual groundbreaker Mary Pickford was the first industry-created star to get her name on a movie marquee, and (even though it came for one of her weakest performances) the second actress to win an Oscar and the first for a talkie: the almost congenitally creaky Coquette. The bountiful audio-track interviews of Pickford partly make up for this documentary’s “authorized” aura and rah-rah narration professionally read by Michael York that leans toward the “Here Was a Woman” school. But despite the fact that Pickford at one time actually entertained the unthinkable thought of buying all the rights to her old pictures so that she could destroy them, this portrait is jammed with so many illustrative clips because, in fact, she did have this trove available for Muse director Nicholas Eliopoulos.
Extras: Included is footage from a festival Q&A in which director Eliopoulos (being either disingenuous or a diplomat) claims he couldn’t find any first-hand accounts to legitimize including Pickford’s descent into alcoholism.
Read the Full Review

Available via WBshop.com’s Warner Archive
Warner, Drama, $17.95 DVD-R, NR.
Stars Deborah Kerr, Yul Brynner, Jason Robards Jr., E.G. Marshall.
1959. This February 1959 politically tinged drama features Deborah Kerr and Yul Brynner back together again only three years after The King and I. In this case, the dynamics are a little different: Kerr is a British “Lady Diana Ashmore” who is divorcing her mucky-muck husband to be with a Hungarian national (Jason Robards in his screen debut) disguised as a Brit trying to escape the 1956 political uprising by traveling to Vienna. Brynner is the occupying Soviet major who detains their bus and acts on his suspicions that something is fishy while also wondering whether to act on his attraction to Lady Diana.
Read the Full Review