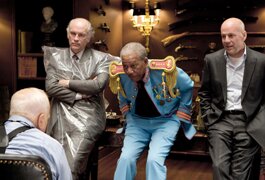 The Portland, Ore.-based media measurement company said consumers spent more than $5.6 billion renting DVD and Blu-ray Disc movies, which topped comparable revenues from digital distribution channels such as Netflix. Netflix generated $3.2 billion in revenue in 2011 from both SVOD and discs, according to company financial statements.

Rentrak compiles data through a proprietary point-of-sale tracking system from more than 65,000 rental properties, including brick-and-mortar, by-mail or online subscription, and kiosks.

While discs remain consumers' preferred rental format, revenue dropped 3.4% compared with 2010 due primarily to the surge in low-margin kiosk rentals, which grew 28% in the fourth quarter.

“People have many choices when it comes to renting videos, for both digital and physical media, so it's interesting to see DVD and Blu-ray Disc rentals are still the number one choice for consumers," said David Paiko, VP of home entertainment at Rentrak.

The data contrasts with a March 22 report from IHS iSuppli that projected consumers would watch more online movies than physical discs in 2012. Widely picked up by media outlets, the IHS report based much of its report on the rise of subscription video-on-demand services spearheaded by Netflix. The research firm estimated paid consumption of movies viewed online would hit 3.4 billion views or transactions this year, about 1 billion more than the 2.4 billion for physical disc. However, the report noted that, while digital movie consumption would grow, it would generate just $1.7 billion in revenue this year compared to $11.1 billion in DVD and Blu-ray Disc revenue.

The IHS report comes despite the fact that Netflix's 21 million streaming subscribers primarily (70% to 80%) watch TV programming rather than movies, according to B. Riley & Co. analyst Eric Wold, who noted Netflix lost some important movie content recently. Netflix lost access to recent Disney and Sony movies following the Feb. 29 expiration of its license agreement with Starz Entertainment, and it now gets the bulk of its recent movies through a deal with Epix, the pay-TV platform co-owned by Lionsgate, Paramount and MGM.

"I'd love to see [IHS'] assumptions. It's hard to see how they got to this," said Will Richmond, editor of videonuze.com, in an email. Richmond had questioned the validity of the research in a commentary.

IHS iSuppli said they took public statements into account in coming up with the projection for movie versus TV episode streaming.

“There have been a number of public announcements from Netflix on this over the past few years,” said IHS iSuppli’s Dan Cryan. “We have used that as guidance for the splits combined with a catalogue assessment for areas and services where less information available.”