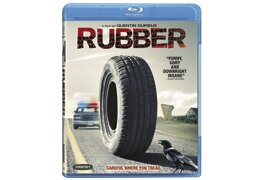 French director Quentin Dupieux’s Rubber is proof that any concept can be made into a film. How far out is it? Rubber tells the story of a discarded car tire that comes to life and starts killing people using psycho-kinetic powers. Yes, you read that correctly. And the tire’s name is Robert.

The film caused quite a stir at Cannes in 2010 and subsequent film festivals, for obvious reasons that will probably make this one a cult classic down the road, not to mention film-school fodder. But such a simple description of Rubber does it a disservice, as Dupieux has crafted a complex farce that satirizes the nature of the rules of cinema and the relationship films have with their audience. It really is something viewers need to experience for themselves.

Before we are introduced to Robert, a car pulls up to a man in the desert, and from the trunk emerges a man dressed like a sheriff (Stephen Spinella) who tells the camera that things in movies usually happen for no reason. We learn he is talking with a group of spectators who are given binoculars and told to enjoy “the film,” which consists merely of watching the events unfold from afar.

Now that Rubber has established its own warped reality, Robert wakes up and gains an affinity for crushing things and using his mental powers to blow things up, starting with small animals and moving on to the heads of people who anger him. He becomes smitten by a beautiful young woman (Roxanne Mesquida) driving to a local motel, then follows her and ends up killing more people, and is witnessed by a young boy.

In one of the film’s funnier scenes, the boy tries to befriend the tire, only to have Robert just roll off. The tire then wanders into a tire fire and decides to avenge his fallen brethren. Hilarity ensues, all the while eliciting lewd comments from the spectators as if they were in a theater.

Oh, and that sheriff pops up again, telling other characters that nothing they do is real and they can all go home because he thinks the audience is gone. It begs the question: Does a film have meaning if no one is around to watch it?

Then he learns someone is still watching, forcing him to actually investigate the tire, which leads to a final confrontation so absurd it only makes sense within the context of a movie. But that’s all part of the point, of course, for a film that follows its own rules.

Only in the movies can a tire be just as alive as any human character, and just as compelling.