'What to Expect' Actors Deliver Laughs 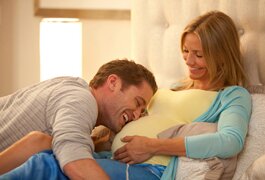 LOS ANGELES — While filming What to Expect When You’re Expecting, which Lionsgate births on DVD and Blu-ray Sept. 11 (order date Aug. 15), the actors in the ensemble film learned a lesson or two from the prenatal book upon which the film is based.

“I learned a lot of different positions to actually have a baby,” said actor Chase Crawford, who doesn’t have any children of his own. “You can get on your hands and knees and let gravity do the work. There are poles involved, a lot of interesting stuff.”

The men in the film weren’t the only ones who learned about the different ways in which one can be “expecting.” In the film, Jennifer Lopez plays a woman who can’t conceive, so she and her husband, played by Rodrigo Santoro, decide to adopt a baby from Africa.

“Before the movie, I never really knew about adoption at all,” said Lopez, who has two children. “I always just wanted to have my own baby, and I was so focused on that, and it took me a while to have my own. But after the film and during the making of the film, when I held those two little Ethiopian twins, I just — you fall in love instantly. And it really occurred to me, you could see how somebody could do this.”

What to Expect When You’re Expecting author Heidi Murkoff said the process of seeing her manual become a film has been an adventure.

“[When] I wrote What to Expect, I was inspired by my first pregnancy,” she said. “And at that time, besides the contractions and the pain, I definitely was not expecting this. Let’s just say that.”

The women who had been mothers in real life exchanged pregnancy stories, including strange bloating — of the nose, Lopez recalled — and Murkoff chimed in by saying that women’s brains also shrink 8% during pregnancy.

“I definitely should not have a baby then because I don’t have 8% to spare,” joked Cameron Diaz, who plays a fitness expert who is impregnated by her fellow contestant on a “Dancing With the Stars”-style show, appropriately played by “Glee’s” Matthew Morrison.

Director Kirk Jones admitted he thought the idea of making the classic manual into a movie was weird at first, but not after considering the dramas associated with pregnancy.

“When I first received the script, I must [have been] the only person in the world who … wasn’t aware of the book, even though I had three children,” Jones said. “I think maybe because I’m from the U.K. It’s big there, but it’s not quite as big as it is here. I looked at the challenges and thought, ‘This could be pretty tough trying to make a movie of a pregnancy manual.’

“But what I quickly realized is that all of the things you look for in movies are encountered on the journey of pregnancy,” Jones continued. “So there’s a very clear time span that doesn’t need explaining — you know pretty much, God willing, nine months after conception you’re gonna end up with a baby. So, dramatically, we know that everyone is moving toward that point again. My three pregnancies that I experienced with my wife were full of some of the funniest, scariest, most dramatic moments of my whole life. So I started to take the idea quite seriously.”

The DVD and Blu-ray comes loaded with deleted scenes, “The Dudes Unscrewed” featurette and a “What to Expect and the Pregnancy Bible” featurette.