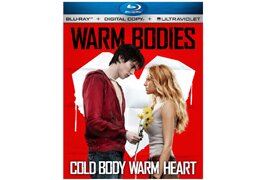 In a post-apocalyptic setting, a group of survivors is entrenched in the daily battle to protect humans from zombie attacks. Warm Bodies gets real quickly, as Julie (Teresa Palmer), her boyfriend, Perry (Dave Franco), and her friend Nora (Analeigh Tipton) find themselves in the fight of their lives, surrounded by bloodthirsty zombies.

Perry doesn’t make it out alive. The offending zombie, known as R (Nicholas Hoult), is instantly drawn to Julie, so he lets her live and protects her from his fellow zombies. Thus sets off an interesting few days when Julie is holed up in an abandoned airplane with R, who secretly wants to keep her around because he likes her. Somewhere along the way, R’s heart is awakened, his skin regains color and his body becomes warm.

That becomes true for the other zombies, including R’s best friend, M (played by the hilarious Rob Corddry). After confessing to Nora that she actually has romantic feelings for R (weird!), Julie lets her leader father, Grigio (none other than John Malkovich), know of this change in circumstance and the greater implications the zombies’ return to normalcy has for humankind. Grigio’s reaction sets in motion a critical turn of events.

There are a few intense, scary moments courtesy of the ruthless “boneys” zombie breed, but the mood is kept upbeat by R’s comical, matter-of-fact voiceovers that let us know just what he’s thinking. Underneath the gruesome visuals, Warm Bodies is a heartwarming story of how love can heal all, and, in this case, even bring the walking dead back to life.

Bonus material is plentiful, with my personal favorites being the deleted scenes with director commentary, the “A Wreck in Progress” featurette about the set design and graffiti interspersed throughout, and Corddry’s wacky “Zombie Acting Tips.”