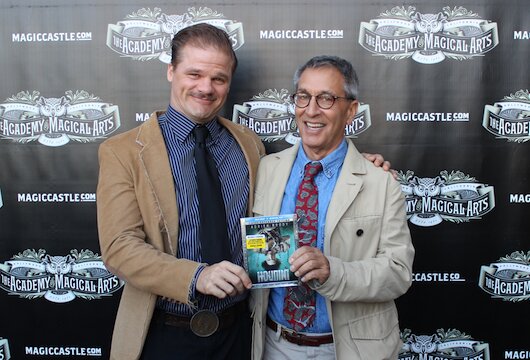 HOLLYWOOD, Calif. — At the famed Hollywood Magic Castle, there’s a Houdini Séance experience, a fun if somewhat cheesy affair, where pre-recorded voices “speak” from the afterlife, and easily spotted wires ring bells and knock books off the wall.

A “spiritual guide” delights guests in the Houdini room with a series of magic tricks, before “making contact” with the spirit of Harry Houdini, all the while telling everyone about the history of the legendary illusionist and escape artist. All in all, a harmless affair. Unless you don’t know who you’re sitting next to.

Nicholas Meyer (Star Trek II, IV and VI, Time After Time), screenwriter for Houdini, the four-hour History Channel miniseries out on disc Oct. 7 from Lionsgate, sat next to the spiritual guide through the event Sept. 25, and more than once bit his tongue, visibly wanting to offer his own insight and corrections.

After all, his father, Dr. Bernard C. Meyer, wrote Houdini: A Mind in Chains — A Psychoanalytic Portrait, the book upon which the miniseries is based.

“There are many books that will tell you the life of Houdini,” Nicholas Meyer said. “But my father’s book is the only one that deals with why he did what he did. And when you read a history or biography, you’re entitled to imagine that the book is as accurate as the author could make it.”

With Oscar winner Adrien Brody (The Pianist) as Houdini, and also starring The Cabin in the Woods' Kristen Connolly and Gangster Squad’s Evan Jones, the scripted four-hour series follows Houdini’s troubled past and at-first-unheralded professional career. His pursuit of the American dream, and how his death-defying acts pushed away those closest to him, are at front and center.

“I had an idea for the character, and figured ‘What could it hurt?’” Jones said of reading for the part of Jim Collins, a character named for a real-life assistant to Houdini that’s actually a compilation of several assistants the magician hired through his career. He actually prepared for the role by visiting the Magic Castle, to learn as much as he could about the trade.

“I didn’t get to do too much magic in the [miniseries],” he laughed.

Though he did wonder exactly what Brody was thinking with some of the stunts he pulled to make the series as realistic as possible for audiences. “When you see action movies, you suspend disbelief,” he said. “But when you’re actually there, you say to yourself, ‘That’s really dangerous.’”

The Oct. 7 two-disc Blu-ray Disc and DVD releases of Houdini feature both the original TV and extended editions, along with four behind-the-scenes featurettes: “The Great Escapes,” “The Real Houdini,” “Cheating Death” and “Houdini the Greatest.”