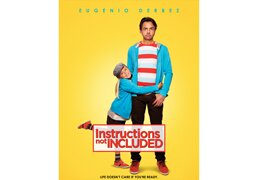 Mexican star Eugenio Derbez crosses over to the U.S. market with ‘Instructions Not Included’

Spanish-language film Instructions Not Included broke a number of records at the box office.

The dramedy has grossed more than $44 million, surpassing Guillermo del Toro’s Pan’s Labyrinth and making it the No. 1 Spanish-language film in the United States. It also became the top limited release (in any language) of the year, according to Variety. And it had the biggest opening weekend for a Spanish-language film, said the film’s director Eugenio Derbez.

And Derbez, also the film’s writer and star, said he hopes the film’s audience will continue to grow on home video.

Lionsgate Home Entertainment brings the Pantelion film to DVD ($19.98) and Blu-ray ($24.99, with Digital HD UltraViolet) Jan. 21, both of which feature an audio commentary with Derbez.

“There are a lot of people who have told me, ‘I’m waiting for the DVD because I have a newborn baby, and I can’t go to the theaters,’ or ‘My abuelita is too old, and I can’t get her to the movies’ or whatever. So I hope we can reach a bigger audience [on home video].”

Instructions Not Included is about a playboy from Acapulco, Valentín (Derbez), who has a fling with an American woman, Julie, who ends up pregnant. Julie leaves the baby with Valentín to raise, only to come back six years later and claim her. But by this time, Valentín is living as a stunt man in Los Angeles and has replaced all the girls in his life with just one girl: his daughter, Maggie.

Though the film exceeded expectations, neither it nor Derbez were by any means an overnight success. Derbez is already a huge star in Mexico as an actor, writer, director and producer. When he conceived the project 12 years ago, Derbez said he had intended for Instructions Not Included to be crossover vehicle for him. The film was intentionally set in both Acapulco and Los Angeles, in both English and Spanish languages.

“To be honest, I never expected the film to cross over,” he said. “But it was planned since the beginning this way. But at the end, I thought it was going to be so hard that I forgot that it could be my vehicle for the crossover. And then finally, suddenly it happened. First, the Latinos went to the theaters. They packed the theaters in such a huge way that Americans started to feel curious about what was going on with this small Mexican film. So they started going to the theaters to watch the movie. Then the rest is history.”

After spending a couple of years writing the script, Derbez said he spent more than 10 years to secure funding for the film. But he said he took advantage of that time by rewriting the script over and over. And while Derbez said he was surprised at how well the film has done, he knew he had a good script and a universal story that could appeal to everyone. He calls it a Latino Life Is Beautiful.

“I think we involved a lot of elements that, joined together, makes this a big success,” he said. “For example, it’s a family movie, and there was a lack of family movies. Normally, the Latino films or the Mexican films were all about drug lords, violence, sex, drugs, blood, murder. And this was a family movie you could go to the movies with your grandma, with your kids, and everyone enjoyed the film. And it was different because there were no stereotypes; there was not that classic Latino being a drug lord criminal, a thief or a cook or a gardener. It was a different kind of Latino having success in Hollywood.”

But Derbez still had some bumps in the road. When he wrote the film, he said he did not want to direct it. After meeting with a lot of directors, all who either wanted to change things or didn’t understanding the movie at all, he said, he finally realized he was the only one who should direct it.

“And thank God I finally made the decision of directing it because if not, it would be a completely different story,” he said.

Another hiccup came when Derbez could not find an actor to play the child in the movie. He originally had wanted to cast a boy. But not finding one with the right look who could speak both perfect English and Spanish, he opened the casting to a girl. And still nothing. A week and half away from the first day of shooting, Derbez, out of desperation decided to tweet.

“I said, ‘Please if you know anyone with these features, blonde, blue eyes, perfect English, perfect Spanish, no accent at all, a lot of charisma, good actor or good actress. Please call me,’” he said. “Finally Loreto appeared through Twitter. Yeah, it was amazing because she’s not an actress. She was not at a casting agency. She’s a natural.”

For fans of Derbez who are used to his comedy, they might be surprised at his talent as a dramatic actor.

It’s the first time as a professional actor and director. Derbez reveals that as a film student, all of his films were dramas.

“Everyone was crying always,” he recalled. “So it’s one of my strengths, to know how to do drama. So this time when I decided to direct, I said I’m going to put for the first time in my career this mix of comedy and drama. And I’m going to be really, really, really dramatic, and I’m going to try to be funny also. But I’m going to show this part that nobody knows. So I did it, and it worked. And my audience was shocked because they were like, ‘My God, I thought I was going to laugh.’ They laughed, but at the same time at the very end they cried.”