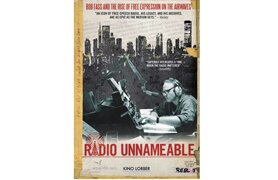 From having gone to school and then (much later) worked out of a suitcase there for years, the Midwesterner in me has always marveled at how quiet the otherwise bustling New York City can be late at night if you’re just walking its streets. A documentary tough to envision being sprung from any other town, this is the story of radio host Bob Fass and his decades-long history with listener-sponsored WBAI, with which he still has an on-air relationship (fewer hours than before and working without pay or benefits, which understandably seems to gravel his wife). Working the all-night a.m. shift during his heyday, former stage actor Bass was much more than the kind of wee-hours monologist that Jack Nicholson plays in The King of Marvin Gardens. In addition to talk, Fass played music — but beyond that, had live music and conducted performer chat on the air: Arlo Guthrie, Joni Mitchell (we hear him asking her if she likes to be called by her first name) and even Bob Dylan. On some preserved audio, the last even responds to a call-in viewer who says his fandom might be increased if Bob could just pay a little more attention to his singing.

You can discern from the guest roster (no Pat Boone here, folks) that the show, like the station, skewed and skews Left-ie. And Fass had the ability to channel activism that could be prankish, controversial (like becoming the information clearing-house for the organized ’68 Democratic Convention protests in Chicago) or widely lauded. An example of the last would be his motivation of volunteer clean-up crews for New York streets, which proved unpopular only with the now defensive city employees who, after all, had been hired to do the same. The case is made, convincingly, that Fass was the Twitter of his day, eliciting listening responses not just from the lonely and disenfranchised but all the workers who were wide awake inside their places of business (someone has to be making al those bagels that are ready to go daily in breakfast-oriented delis).

After the Vietnam War ended, the station seemed to lose its way for a while because the anti-war coalition got further splintered between the women’s movement and other constituencies overdue to get their day. New management took over, Fass found himself locked out of his own building and … well, it’s a complicated story that gets its airing here, though part of the fallout explains why Fass doesn’t get paid for what he does today.

One major side issue is a Fass audio archive that consumes every spare inch in his home, this side of the refrigerator. Apparently, he is one of those guys who preserved (so to speak) everything, though we get some footage near the end where friends come over and begin what looks to be at least rudimentary cataloging of old tape devoted to visiting troubadours, reports from the Yippie front(s) and at least one instance of where Fass tried to talk down a caller who’d just ingested something in a slow-to-play-out suicide attempt. The disc’s bonus section makes some use of these taped holdings, and there’s even the inclusion of an early ‘90s Fass appearance on Coca Chrystal’s rather liberated TV cable show (kind of a Merv Griffin alternative), which offered its own underground listening rewards from the day. Chrystal seems to be on her good behavior, though, and the result is more like two like souls getting together.