Pauline at the Beach (Blu-ray Review) 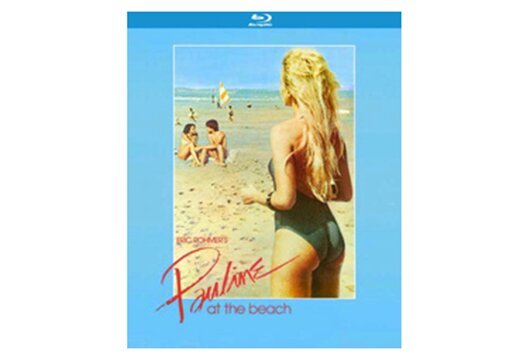 Distributor Orion Classics didn’t waste much time getting this Eric Rohmer charmer into theaters after its late March 1983 opening in France, perhaps because a July U.S. date was in keeping with Pauline’s status as an ideal summer movie for anyone interested in a movie about summer and not just another superhero entry for the teenage-lobotomy demographic. And even at that, Pauline (Amanda Langlet) is a teenager herself, though not necessarily the most intriguing character in the movie.

This entry in the filmmaker’s sublime “Comedies and Proverbs” series (I happily sprung for the Region B box set) has the usual Rohmer virtues: appealing actors; delicious deceptions (which temporarily turn key protagonists into fools); a constant reshuffling of romantic entanglements; and heavy doses of character-driven dialogue that result in nothing like watching a filmed play. To this, we add what distributors used to refer to as “scenic values” — which include seductive beach shots of the Normandy coast; a beach house to kill for or at least salivate over; and, if you like, some sizzling visuals of co-lead Arielle Dombasle as Marion, the older cousin in whose care Pauline is for the summer. Blonde Marion is nobody’s airhead, but certain of these individual shots have the potency to shatter the eyeglasses of certain observers — the way they do for slapstick effect during the patented Frank Tashlin opening to The Girl Can’t Help It when Jayne Mansfield walks down the street.

Marion is looking for love (not just sex) and serious about it the way so many in Rohmer films are. She’s not exactly wanting for pursuers but thinks she knows what she wants, even though she’s already chalked up a past marriage that just didn’t work. (Though there isn’t much about this movie I’d change, it would be fun to see a companion piece with more particulars about how that went.) Soon after the cousins arrive and make it just a few hop-skips to the shore, they run into a long-ago acquaintance of Marion’s (Pascal Greggory as Pierre), and he’s more than ready to rock with her (Pauline thinks he’s a good choice). But almost from the get-go, Marion is more interested in another guy on the beach (Feodor Atkin as Henri) — someone Pierre doesn’t know well but knows well enough to know that he isn’t someone to whom you introduce your sister or even divorced mother.

Henri is a smoothie who also has that great beach house, and the only thing that keeps him from being a full-fledged romantic heel (an even this is highly debatable) is his willingness to admit that he’s forever on the make. So we have a Pierre who’s in love with a Marion who is losing her bearings over Henri; eventually mixed up in all this is 15-year-old Pauline and the easygoing fellow kid with whom she has hit it off in a relaxed way (played by Simon de la Brosse, an actor who would later commit suicide in real life at 32). The poor kid would likely be happy enough with just some mutually pleasing kissy-face, but here he is embroiled in Henri’s duplicity involving a femme local who peddles flowers on the beach (a tough-sounding job because what are you going to do with them?). This is the kind of typical Rohmer set-up that worked for the director time after time: a single lie or misunderstanding that takes the dynamics between just about every major cast member and flips them on their head.

I haven’t been crazy about the color work in a lot of recent Kino releases (usually from MGM-UA masters) when it comes to United Artists Hollywood films of the ’50s and ’60s. But this one, from a relatively modern era, is an outdoor beauty that gets a major assist from a cooperatively bright sun — to say nothing of having had cinematographer Nestor Almendros briefly back in France for during a period in his career when he was working mostly on English-language projects. For a movie with lots of (good) talk, this one really massages the eyes. And a bonus interview with Rohmer, from 1996, indicates why his work almost always seemed wise and youthful, even as he was getting into his 80s.