Drew: The Man Behind the Poster (DVD Review) 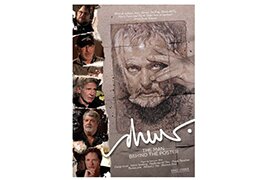 If a movie was popular in the 1980s, odds are that Drew Struzan painted the poster for it.

Drew: The Man Behind the Poster is an exceptional bit of pop culture nostalgia for those of the “Star Wars” generation, to whom Struzan’s work is unmistakable. What may be surprising is the sheer scope of the projects he worked on that even his fans might not realize, and the number of filmmakers and artists he’s touched during a remarkable career.

The documentary traces Struzan’s career from his early years building a family and making a meager living painting album covers. His talent quickly led to Hollywood, where his movie posters become iconic. His work includes most of the posters for the “Star Wars” films, as well as the “Indiana Jones” films, Back to the Future, E.T. — The Extra Terrestrial, the “Harry Potter” films, the “Police Academy” films, and many more, including some of the DVD covers for “The Walking Dead.”

At one point, famed critic Leonard Maltin remarks that when he thinks of Ford, he pictures Struzan’s iconic image from the Raiders of the Lost Ark poster. This observation is all the more interesting considering Ford’s depiction as Han Solo in Struzan’s “Star Wars” art (mostly book covers) looks so much different.

To be sure, Struzan’s posters are true works of art, and it’s no surprise any film fan would be proud to hang one of his prints on the wall. A common refrain from those involved is that painted art is so much better at capturing the feeling of the film in one image than any photograph could. And they have a point. It’s hard not to agree as they lament how the movie poster has become a lost art, so to speak, taken over by studio marketing machines obsessed with focus groups and easy access to photoshop. As Thomas Jane hilariously points out when holding up the poster for Masters of the Universe, even if the movie is crap, a great poster can make a viewer excited to see it, and that’s a talent for which Struzan remains unmatched.