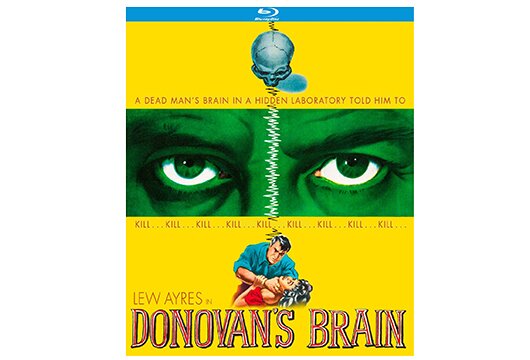 Even in a big-screen screen career that lasted less than a decade (followed by a smattering of TV work), Nancy Reagan did find a way to star in a loose remake of a Curt Siodmak novel that had previously been a vehicle for Republic Pictures’ risible enemy of nouns and verbs Vera Ralston, the onetime Czech ice-skater who must have had the same diction instructor as Maria Montez. This kind of sums up the kind of movies the future First Lady landed — the best of which, in her own opinion, was 1951’s Night Unto Morning opposite Ray Milland at MGM (and she was probably right). But of the others, Donovan’s Brain (despite being no Donovan’s Reef) is one of the few that has any kind of rep — not that her acting brought anything to a party that was catered with slightly less cheese than one might expect.

This version has the same title as the book, whereas the 1944 Ralston version went by The Lady and the Monster — a tribute to Republic chieftain and future Ralston husband Herbert Yates’s consummate good taste when it came to monikers and everything else. In Monster, Ralston had top billing, but in this go-round, the former Nancy Davis is subordinate to lead Lew Ayres, whose performance is more than respectable as an honorable surgeon who goes good and bonkers after an scientific experiment gets away from him. It should also be mentioned that in addition to a TV go-round that aired on “Studio One” in 1955, there was a third theatrical version in 1962 called The Brain, which starred the screen’s hall of fame World War II “kraut” Peter Van Eyck and dishy Anne Heywood, who later did a tie-in Playboy layout for 1968’s The Fox. This play-it-again remake is not to be confused with ’62’s infamous howler The Brain That Wouldn’t Die with Virginia Leith — which, per the expert Donovan’s Brain commentary here by Richard Harland Smith, is less an exposed brain movie than a severed head movie. I can just hear the remarkably savvy Smith saying, “Art is my life.”

In any event, this Ayres/Davis-Reagan take starts out with a soon-to-be-dead monkey, which was not a conscious homage (though the connection is unavoidable) to Ronald Reagan’s immortal Bedtime for Bonzo. Arizona-based Doc Ayres is trying to keep the poor creature’s brain alive in a tank, a starting point for what he someday hopes to do with humans. Davis is his combination wife-nurse-assistant laboring in their home laboratory — supportive but understandably worried after her husband ill-advisedly takes his experimentation to the next level by attempting to preserve the brain of a filthy-rich magnate whose private plane has conveniently crashed not far from their household. Even the doc’s alcoholic associate (Gene Evans) sobers up some when pondering the ethical considerations of removing a brain without (for one thing) checking with the victim’s family.

Even so, the experiment works for a while — and too well, in fact — when the brain starts to take over Ayres’s personality. This causes a lot of mayhem because the dead Donovan, had he lived in 2016, would be a candidate for the Donald Trump Humanitarian Award, judging from how he treated hotel clerks, clothing store personnel, the IRS and more. As a result, the beams or neurons or whatever that are emanating from the brain (which floats in a lab tank) turn what previously had been a humble man of science into a megalomaniac. He’s also spending a lot of the late Donovan’s cash holdings, though his loyal spouse doesn’t seem to be benefiting from much of this new high-on-the-hog lifestyle.

Brain was either a B-movie or what they used to call a “shaky A”; when this late-September 1953 release belatedly got a booking in my hometown well into 1954 (could this have been Ohio’s squeamish censorship board in action?), it was as second feature to Barbara Stanwyck’s only slightly less modest Witness to Murder, which is also available on a Kino Classics Blu-ray. By this time, Davis’s big-screen career was just about over, though the notoriously insufferable Hellcats of the Navy (which starred both Reagans) was still four years away from becoming a barnacle on the nation’s lower-end drive-ins. Her family’s family connections notwithstanding, Davis’s mystifying ascension into features brings to mind what a musician friend of mine says about Barry Manilow’s singing, which is “No pipes.” In a like vein, here was an actress who had no charm, no heat and no looks (though ironically, she looked her best — quite attractive, in fact — in the 1960s, after her career was finished).

In addition to a nice remastering job on the print, commentator Smith is fabulously encyclopedic on virtually every actor here; he even rattles off a long list of movies that were co-features (Hondo and Donovan’s Brain would definitely have gotten my money). He also goes into great detail about source novelist Siodmak’s tangle of a career — though he doesn’t talk much (or at all, unless I got distracted) about 1951’s trash classic Bride of the Monster, which I seem to recall getting released to TV in only a little more time than it took for theater staffs to Windex down their corn poppers. Smith also blew me away with the revelation that Allan Dowling, whose short-lived production company gave us Brain, was also publisher for a while of the Partisan Review. Compared to an MGM chill-pill of a starlet becoming First Lady, maybe this isn’t much. But even so …

New on Disc: 'Suspicion' and more …