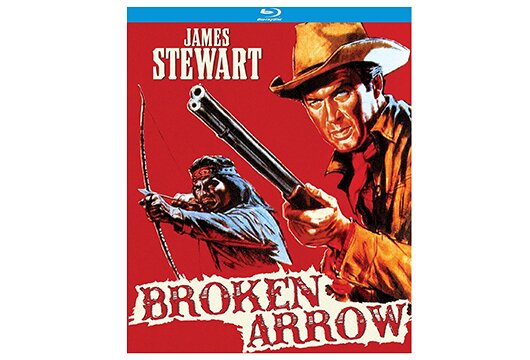 Popular enough at the time to have motivated a spinoff TV series six years later with John Lupton replacing Jimmy Stewart (now, there’s a trade), Broken Arrow may not be best of the Delmer Daves Westerns, but it was his first and probably the one that comes closes to being a household name. A landmark big-studio movie unusual at the time for its sympathetic treatment of Native Americans (director Anthony Mann’s likeminded Devil’s Doorway would come out about a month later), it was one of three 1950 releases in quick succession that turned around Stewart’s commercially spotty career in the first few years after World War II following It’s a Wonderful Life’s inexplicable flop-dom. From then on, it became very rare to find a theatrical release — aside from the cheapies whose ‘B’ ambitions extended no further than 5 a.m. coffee-and-doughnuts showings at drive-in theater all-nighters — that treated Indians as one-dimensional savages.

If there’s any one-dimensionality here, it’s perhaps an excess of nobility, which is why I prefer Jubal, The Last Wagon, the original 3:10 to Yuma, Cowboy and The Hanging Tree when it comes to Daves Westerns; just once here, I’d like to see Cochise or one of his followers say to Stewart’s real-life Tom Jeffords character, “I’ll be back in a minute after I go into the bushes for a No. 2.” Even so, Arrow is fairly irresistible to a point, and one of its three Oscar nominations went to Ernest Palmer’s often painterly color cinematography, which it lost to Robert Surtees and King Solomon’s Mines (a less-than-fair fight because the latter had Deborah Kerr’s red hair going for it right out of the box).

The screenplay was by Albert Maltz — or, at the time, Michael Blankfort “fronting” for the Hollywood Ten blacklistee — in a credit later reinstated in one of those miscarriage of justice rectifiers that eventually added a lot of muscle to Dalton Trumbo’s filmography. It begins with what must have been a jolting table-setter in its day: Jeffords coming across a badly injured Chiricahua Apache of 14 years and unexpectedly nursing him back to health in one of those campfire surgeries that must have left the victim with a lot of bumpy scar-tissue topography. The boy’s kin then shows up, and Jeffords almost buys it for good when they tie him up and gag him to prevent his ability to warn approaching miners on horseback (they’re on Apache land, as is Jeffords, who’s pursuing gold himself). But honor is honor, and the life-saving gesture toward the boy is appreciated, even though Jeffords has been forced to witness his white peers being eaten by ants. Thus, he’s allowed to go on his way and straight into town — among a lot of white rabble-rousers with a cause who are now unprepared to trust him. They’ve had enough families massacred and homes burned down to earn their wrath — though this said, mob mentality and big mouths go hand-in-hand (not for the first nor last times).

At this point, the story becomes one about a person trying to straddle opposed cultures — a theme unlikely, to be sure, ever to lose its topicality or relevance. Utilizing what currency he has left with his own people, Jeffords agrees to attempt a negotiation with the Apaches over their continued massacre of white mail transporters — a high-stakes long shot that necessitates his meeting with Cochise himself. Jeff Chandler, of all people, has the latter role — and though no one has made more wisecracks over the years about big-screen Jewish Indians than I have, Chandler is so quietly imposing in a role where underplayed nuance is everything that his supporting Oscar nomination here is understandable. For that matter, even studio-groomed Caucasian Debra Paget is not without appeal; in a role that became the movie’s main deviation from fact — as an Apache maiden (promised to another) who can only take up with Jeffords after Cochise puts on his Cupid headdress. This is one of those early angelic Paget performances that are a little difficult to reconcile with her later bump-and-grind gyrations on a famous 1956 “Milton Berle Show,” the same legendary NBC broadcast where she came in for the same kind of criticism that Elvis Presley did when he performed “Hound Dog” without any of that Ed Sullivan shooting-above-the-waist folly.

Though there’s no way Arrow’s supporting casting isn’t going to be at least a little jarring to today’s more politically sensitive eyes, it plays somewhat better than it sounds. Interestingly, Daves, Chandler, Paget, Technicolor, 20th Century-Fox and the theme of culture-straddling would return just a year later with the studio’s remake of Bird of Paradise, a “Polynesian” with plot similarities too striking (despite the dramatic differences in locale) to have been coincidental. It’s an indirect indication of how resonant a movie Broken Arrow was — and, indeed, one of my local downtown movie palaces brought it back as a co-feature in 1953 to bolster its run of Betty Grable in The Farmer Takes a Wife, which in those days was the kind of thing that only happened a few times a year. Along with Winchester ’73 (released a month earlier) and Harvey (two months later), a new era highlighted by Stewart’s suddenly matured persona got launched, and the actor was primed for what became his greatest decade.

Forceful in a small role is Jay Silverheels as vengeful hothead Geronimo, concurrent with the actor’s immortalizing of Tonto on TV’s “The Lone Ranger,” a pop-culture molder of Boomers if there ever was one. Silverheels is definitely in take-no-prisoners mode here, which synchs amusingly with all those Tonto jokes that ’50s wags used to make about “kemosabe” secretly translating as “roach.” Iron Eyes Cody (and his real-life brother J.W.) are also around for a kind of Native American old home week, and there’s even a clean-shaven Arthur Hunnicutt in three-strip for those who enjoy sailing down buffy tributaries. Cast as the real-life general who employed Jeffords to negotiate an even more advanced treaty than the mail-delivery agreement is Basil Ruysdael, a character actor I always liked. He later played Andrew Jackson to Fess Parker’s Davy Crockett — and in both endeavors displays with more weathered polish than Jackson probably had (Charlton Heston’s version of Jackson in two movies also made the general/president more than just some rustic who slurped it out of the jug).

Kino’s transfer is on the higher side of uneven: gorgeous in certain compositions (the film’s bountiful location work is a huge plus) but occasionally displaying what looked to me like registration problems, albeit nothing like the ones in the weakest sections of, say, Twilight Time’s maddeningly uneven Blu-ray of The Barefoot Contessa. Inherently speaking, Arrow was probably an even more gorgeously shot color Daves Western than Jubal, but Criterion’s Jubal is the better-looking disc. And as long as we’re talking about the Western phase of the director’s rather eclectic career even before he got to its Troy Donahue phase, a Warner Archive Blu-ray release of The Hanging Tree has been high on my wish list for a long time. You can be the judge of its chief selling point: As George C. Scott’s first film, one of Gary Cooper’s last or as the only movie with a Marty Robbins title tune in which a doctor (Cooper) lances the boil on Karl Malden’s behind.