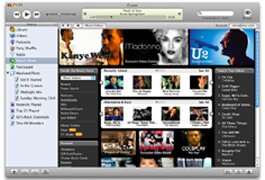 Apple Inc.'s iTunes media store ended 2010 as the online go-to destination for electronic sellthrough, or EST, and Internet-based video-on-demand, according to a new report.

Apple iTunes also benefited from the launch of the iPad in April and re-introduced Apple TV last fall.

However, the company is facing rising competition in the United States from Amazon VOD — and Walmart’s Vudu service. Indeed, Walmart’s aggressive drive for market share for its U.S. online movies service, Vudu, generated a spike in consumption for the service starting in the fourth quarter of 2010. The company announced 99 cent promotional pricing on iVOD movies and support for a wider range of living room devices, including Sony’s PlayStation 3 video game console.

“The future of the online movie business may come down to a competitive battle between Apple and Walmart,” Amel said. “Although Walmart is not on the charts yet, the company soon will become a major player if its current momentum continues. The company already represents a critical source of revenue for the major Hollywood studios because of its massive sales of Blu-ray Disc and DVD movies —and now is expanding this business into the online realm.”

Walmart generated more than $3.5 billion in revenue to the studios from sales of physical movies in 2010, IHS Screen Digest research indicates.