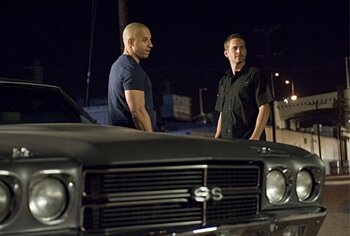 Universal Studios Home Entertainment is making up for lost time. The studio that was the last to get onboard with Blu-ray Disc now seems bent on becoming one of the high-definition format’s key innovators.

The studio today is expected to announce plans to deliver an extensive array of touch-enabled iPhone and iPod features to its upcoming Blu-ray Disc releases. The features can be accessed via companion applications from Apple’s App Store.

Releases also will integrate with social network applications such as Twitter and Facebook to let users update their followers and friends about movie-related activities.

“Bridging these platforms further broadens the scope of the digital landscape by paving the way for innovative new applications and interactive content enhancements that continue to uniquely engage consumers.”

The two-disc special edition Blu-ray Disc edition of Fast & Furious will include a “Virtual Car Garage” bonus feature using BD Live technology. BD Live lets consumers hook up their Blu-ray Disc players to the Internet to access a variety of Web-enabled interactive features, provided that the disc itself also has BD Live functionality.

The Virtual Car Garage feature lets viewers use the touch screens on their iPhone or iPod touch devices to control 360-degree views of the movie’s street racers and instantly call up the cars’ technical specs.

The two-disc special edition Blu-ray Disc of Fast & Furious ($39.98) also includes a digital copy of the film for portable devices. The app will be available for free from Apple’s App Store on iPhone and iPod touch or at www.itunes.com/appstore.