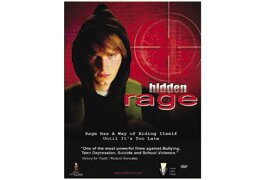 It’s unfortunate that bullying has become a part of life for the youth of today, be it in the classroom, at home or online. Hidden Rage seeks to present a tangible depiction of what the tormented souls in those situations encounter.

From the beginning of the film, we know that Joshua (Aaron Goldenberg) is hurting. School bully Melvin (Jaiden Anthony Balzola) beats him up as all the other kids cheer. It’s bad enough that his absentee mother is too busy working to spend time with her son. When she finally does, his resentment leads to an argument. Joshua’s father left home long ago and doesn’t care to be a part of his life. These family problems, on top of the torture he faces at school, lead Joshua to neglect his homework, act out and turn to violent video games for release.

While he feels that no one cares about him, he has a best friend, Stephen (Dario Lado), who unsuccessfully tries to get him to discuss the demons he’s battling. School security guard Tony (Eric Nelson) also reaches out to Joshua. The Army vet’s young son was killed in a drive-by shooting — the nightmare often is replayed in his sleep — and he feels burdened to make a difference in the lives of the students at the high school.

As the bullying worsens and the bad dreams intensify, Joshua buys a gun illegally after contemplating suicide. One day he finally is pushed too far.

At various points in the film, different characters share the Gospel with Joshua, who hears the message clearly when he needs it the most. Hidden Rage is a sober look at a very real problem and will make you think.