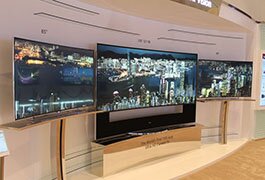 Although 4KTVs have been available for several years, shipments in 2014 have accelerated due to broader competition and more-accessible price points. Best Buy will offer a Samsung 4KTV for $900 on Black Friday — the first time a Samsung TV with Ultra-HD functionality is available under $1,000.

China remains the focal point for 4KTV unit volume growth, accounting for more than 60% of global 4KTV shipments in Q3; plus, it has the highest share of 4K shipments of any region, at more than 13%. Western Europe is the next region with 6% of 4KTV shipments, a significant increase since the beginning of the year.

“With a scarcity of content and streaming options, much of the early success for 4K will rely on education campaigns from brands and price compression that will make it more affordable,” Paul Gagnon, director of global TV research at DisplaySearch, said in a statement.

China is the leading 4KTV market, with local Chinese brands competing effectively with Samsung —— the latter aggressively pushing for growth in the communist country.

After bowing an expanded lineup in the second quarter, Samsung leads all 4K brands in the nation. With 36% of the 4KTV shipments, Samsung led the market on a revenue basis globally in Q3. The company has significantly outpaced all other brands. Chinese brands have a stronger share thanks to greater volume within China, and a low average price compared to global brands competing in markets outside of China.

However, with the arrival of greater competition in North America and other markets, as well as rising 4KTV exports from Chinese brands, competitive price compression will be difficult to avoid for most brands.

“While the last several years in the TV business have been difficult in terms of overall shipments and revenue, the market is showing some broad resiliency now, with most regions enjoying growth in the third quarter,” Gagnon said. “Consumption for primary TVs is entering a renewed replacement cycle in some key regions, and adoption of larger screens and 4K and other higher resolutions will keep consumers upgrading.”