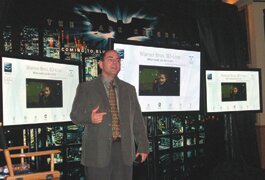 UNIVERSAL CITY, Calif. — The Dark Knight in theaters was a Hollywood game changer, approaching nearly $1 billion in receipts worldwide. So it’s fitting Warner Home Video is considering the film to be the biggest thing for Blu-ray Disc since, maybe, the PlayStation 3.

“We think it’s probably a game changer for Blu-ray,” said Warner president Ron Sanders. “We believe it can be a driver for hardware adoption much the way The Matrix was for DVD.”

A week before the street date, Warner took over a corner of Universal City, bringing out props and costumes from the film, and the director Christopher Nolan, for a Batman-themed party and Imax screening.

“It’s very simple, easy to use, slick,” said Donnie Roache, executive director of DVD operations and creative services for Warner Home Video, as he showed off the first BD Live features from Warner Bros. “[The menu] will look the same on any title we use [BD Live].” Roache showed off how Dark Knight Blu-ray owners can get new trailers, streaming video and animated comics. Owners also will be able to record a commentary track, access picture-in-picture features, shop at Warner Bros.’ online store, make a database of their high-def collection and access a digital copy of the film.

Nolan, while praising the detailed array of bonuses available on the two Blu-ray versions, said he knows some might be disappointed by what’s missing on the Blu-ray special features.

“I didn’t want a special feature focusing on Heath [Ledger’s] passing,” Nolan said of the deceased actor, who’s final acting performance as The Joker has earned calls for a posthumous Oscar nomination. “I wanted to do it the way we would have done it if Heath hadn’t passed.”

The Dec. 2 screening was shown in an Imax theater, a nod to the many Imax components of The Dark Knight.

“There were scenes in the film shot in the Imax format, the best and largest film format ever invented,” Nolan said. “It’s something we retain on the Blu-ray version of the film.”
The Blu-ray video will be shown in a 2.40:1 aspect ratio, except for Imax scenes, which will be shown in 1.78:1.

Nolan said the crispness of the Blu-ray image does pose some problems for filmmakers who don’t want the movie magic exposed too much, but he said he couldn’t deny the excitement he and other filmmakers feel knowing their high-def productions will be seen at home in the best way possible.

“What I like about movies with Blu-ray is it really does raise the game with what we do theatrically,” he said. Instead of a standard director’s commentary (which Nolan called “peculiar”), the Blu-ray features a picture-in-picture “Focus Points” option for watching the film with added details for certain scenes.

On Dec. 18 the first 100,000 The Dark Knight Blu-ray owners who register through Warner’s BD Live network will get to join Nolan in a BD Live-enabled Q&A session while the movie rolls.