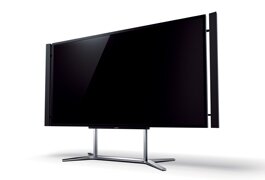 The 2012 holiday season should see the usual bevy of discounted home entertainment hardware — everything from HDTVs to 3D Blu-ray Disc players.

It will also see a relatively new home entertainment hardware offering: 4K TVs. And anyone with enough cash to buy one shouldn’t plan on any discounts.

Other consumer electronics companies, including Panasonic, Sharp, Mitsubishi Electric and Toshiba, have shown off 4K sets in the past year (and Toshiba is planning an entire line of 4K sets in 2013) but this holiday season sees the first real push of the technology to the consumer market.

“First there was analog, then digital — standard-definition, then high-definition,” he said. “Now, with four times the pixel resolution of today’s HDTVs, ultra-HD technology promises to transform the home entertainment experience on giant displays, truly recreating the movie theater in [the] living room.”

Both LG and Sony are touting their 4K sets as not only the pinnacle of home entertainment video, but also the perfect vehicle for 3D, offering above what 1080p 3DTVs offer. And in terms of available content, Sony has tracked the number of major feature films shot digitally in 4K — from Spider-Man 2 in 2004 to The Dark Knight Rises in 2012 — with nearly 60 films mastered in 4K so far.

The hardware companies are excited about the prospects of 4K in the home. But as of 2012 there’s one major problem: No 4K content for the living room is currently available. Nothing on disc, nothing from broadcast, nothing via streaming or VOD.

Current Blu-ray players can’t support 4K, and either fitting a 4K film on Blu-ray or attempting to broadcast 4K content would require a level of video compression that would severely hurt resolution, according to Michael Karagosian, president and founder of MKPE Consulting, which focuses on digital cinema and 3D technologies.

He argues that true home entertainment 4K would likely require a frame rate (frames per second, or fps) of 60 fps, more than double the 24 fps that has been the standard for films for nearly a century. Director James Cameron is aiming to hit that mark, filming the Avatar sequel at 60 fps.

“If frame rate is low, then all that a higher resolution image can offer is more pixels describing a blurry moving image,” Karagosian said. “If frame rate is high, then motion is captured with less blur, which then might benefit from a higher-resolution display.”

Cinema 4K has been around for several years, and with a giant theatrical screen little video compression is needed for a visually lossless picture, Karagosian noted. But TV is different.

“Higher resolution images will require more compression — at some point there has to occur diminishing returns,” he said. “Higher frame rate images require higher compression, too, but the move from HD to 4K requires four times the pixels, where doubling the frame [rate] only doubles the pixels.”

The Blu-ray Disc Association (BDA) says it has no current plans to add support for 4K to Blu-ray Disc specifications, but the group has expressed confidence that Blu-ray’s 50GB capacity can accommodate the higher data rates that 4K sources would require.

“If and when we do decide to develop a 4K version of Blu-ray … I’m confident that only packaged media will have the capacity and throughput needed to do it justice,” Andy Parsons, SVP of corporate communications for Pioneer Electronics and chair of the BDA’s promotion committee in the United States, said during a recent Blu-ray roundtable discussion.

“4K satellite transmission may arrive in the home sooner than predicted by the industry,” Olivier Bovis, head of AV media for Sony Europe, said in a press release.

Ron Epstein, founder of the Home Theater Forum — an online community of home entertainment hardware buffs — said the potential for 4K in the home is there, but if it gets off the ground, adoption will be slow.

“Will there be a new disc format? Will studios release their films in 4K? With that kind of uncertainty there hasn’t even been a software format announced that supports 4K,” he said. “Until studios sign on board I don’t see any advancements.”

A recent forecast from IHS iSuppli backs that up, estimating approximately 4,000 4K TVs will be shipped in 2012, with 2.1 million shipped in 2017, which would still be less than 1% of global LCD-based TV shipments.

4K Needs to Be Big

The consensus among observers is that 4K will only work in the home if the screens are big — evidenced by the 84-inch LG and Sony sets.

“If you have a television that is 60 inches or larger and are watching video that has a 3,840 by 2,160 resolution, then a 4K television makes sense,” Tom Morrod, director of TV systems and technology research for research firm IHS iSuppli, said in a press release. “However, a very limited amount of content is available at the 4K resolution.”

Benjamin Arnold, consumer technology industry analyst for The NPD Group, said that with affluent consumers looking to trade up on their TV screen size, 4K has a better future outlook than 3DTV.

“I think 4K probably has more appeal than 3D long term just because it’s a less obtrusive improvement to the content experience as opposed to a layer added to the experience — a la 3D,” he said. “Of course, adoption will hinge on content availability.”

Ben Drawbaugh, high-def editor for consumer electronics site Engadget.com, noted that it wasn’t long ago that the largest TVs in American homes were 32 inches. That could be considered small today. An 84-inch set in the living room isn’t a far-fetched concept.

“Screens will be bigger, produce better-quality pictures and that means higher resolution,” he said. “So 4K [is] the future, and while [it] currently has no practical short-term application, who knows what is in store long term.”

Yet MKPE Consulting’s Karagosian offers a different perspective on 4K sets: Size doesn’t matter, he said. In theaters, only those in the very front rows can enjoy the benefits of a 4K image. At home, a viewer would have to sit no more than 1.5 screen heights back from the TV to get the full effect of a 4K image, he said.

“In the cinema, only the front rows can resolve 4K resolution, and no one wants to pay extra for front row seats in the cinema,” he said. “It’s no different in the home — most people don’t like to sit that close to their TV.”