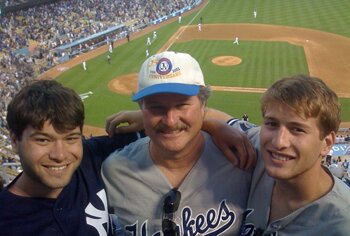 Drew Rosenberg, the oldest son of former Home Media Magazine publisher Don Rosenberg, was killed in a traffic collision in San Francisco the afternoon of Nov. 16, according to the San Francisco Police Department. Drew was 25.

Drew Rosenberg was pronounced dead about a half hour after the motorcycle he was riding collided with another vehicle around 5:30 p.m. at the intersection of 16th Street and Harrison Street in the city’s Mission District, a police spokesman said.

The spokesman said the cause of the “tragic accident” was under investigation.

Drew Rosenberg was in San Francisco, attending law school. Don Rosenberg joined what was then Video Store Magazine as publisher in 1994 and left parent company Questex Media in 2008 as VP of the entertainment group.

“Our hearts, and our prayers, go out to Don and his family in this difficult time,” said Thomas K. Arnold, publisher and editorial director of Home Media Magazine.

Services have been scheduled for Sunday, November 21, 2010, at Mt. Sinai Memorial Park in Simi Valley, Calif. The funeral starts promptly at 10 a.m., followed by shiva at the Rosenberg home in Westlake Village, Calif. For more information, contact Thomas K. Arnold at tarnold@questex.com.