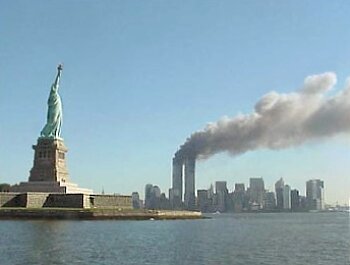 On Monday Sept. 11, 2000, I stood in front of One World Trade Center in Manhattan in search of Stephanie Blank, director of PR with an upstart dotcom venture located on the 84th floor.

I’d met Stephanie and her 1,000-watt smile the previous year as a reporter with AdWeek attending the magazine’s soiree near its corporate office on Times Square.

Those were heady times when lingering dotcom largess afforded me — then a news editor with Billboard — a second visit to the Big Apple. I was as much enthralled by the city’s energy as I was with the specter of meeting Stephanie again.

Of course I hadn’t called or emailed. Texting didn’t exist and more importantly, she probably had no idea who I was. That first night’s initial charm was likely more PR maneuvering than anything else.

As I stood amidst the bustling lobby of the World Trade Center tapping Stephanie’s business card, I turned around, exited the building and got vertigo staring skyward at the towering columns.

A year later on Tuesday, Sept. 11, 2001, a co-worker looked up from his computer at Billboard’s Mid-Wilshire office in Los Angeles and told me a plane had just crashed into the World Trade Center.

A short while later I was on the phone with a contact at Warner Music Group who informed me that Carolyn Beug, an award-winning music video executive with Walt Disney Records, had been on the American Airlines flight out of Boston with her mother that had just slammed into the north tower of the WTC.

He knew this because Carolyn’s husband, John Beug, an accomplished music DVD executive with Warner Music, worked down the hall.

I had a scoop and obit on the worst day in the nation’s history. Billboard’s fax newsletter (digital editions didn’t exist yet) carried the news, despite initial jitters from the deserted New York office.

Several years ago working for Home Media Magazine, I had a phone interview with Mr. Beug regarding a music DVD. I was warned in advance not to talk about 9/11 — the publicist obviously unaware of my previous connection.

On this, the 10th anniversary, I’ve never contacted Stephanie again, but kept her WTC calling card as a 9/11 reminder. I’ve seen her photo and mention online, so I know she didn’t perish when the Towers imploded, the irony being that when the dotcom bubble burst in early 2001 — temporarily sending the economy into a tailspin — it likely forced Stephanie and her nascent employer BePaid.com out of the symbolic Towers and fate’s grasp.