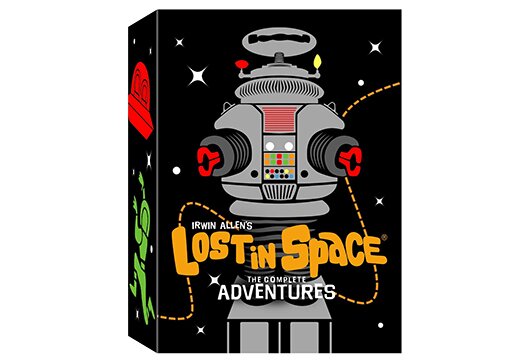 The original "Lost in Space" episodes have been faithfully remastered for high-definition, but what makes this 50th anniversary Blu-ray set so great is the treasure trove of bonus material related to the show — everything from cast commentaries to promotional materials, and even an attempt to provide some closure to the series' central storyline.

In the annals of televised sci-fi, "Lost in Space" actually arrived on the air a year before "Star Trek," but is often regarded as much less influentual than its space-faring rival, for a variety of reasons.

While both shows ran three seasons and exhibit a certain cheesiness related to their 1960s production values, "Star Trek" took itself much more seriously and, over the years, managed to grow as a franchise beyond its initial run. "Lost in Space," on the other hand, never received a proper continuation beyond its 83 episodes (which is actually four more than the original "Star Trek" ended up with).

There were attempts to reboot the concept, most notably a 1973 Filmation animated special (which is included on the Blu-ray) and the god-awful 1998 movie version, but these weren't related to the original storyline of the Robinson family being sent off course during an attempt to colonize another planet, and then having to survive in space while trying to find a way back to Earth (an obvious Swiss Family Robinson in space). In fact, the only time the original cast would reunite on camera was for various documentaries or television specials to promote reruns.

That's what makes the "Epilogue" extra included with the Blu-ray so special. Written by Bill Mumy (who played Will Robinson) in 1980, the epilogue was intended by the actor to be a reunion movie to provide some closure to the show, which had been canceled with the Robinson family still stranded in space. The epilogue comes in the form of a table read with most of the surviving original cast members, plus the children of series star Guy Williams and a few other special guests, and it's quite endearing to see how easily the actors slip back into their old roles.

Taking place some 15 years after last checking in on the characters, the epilogue would have offered one final adventure for the crew, but according to Mumy producer Irwin Allen refused to look at it for legal reasons in case he wanted to ever do his own revival (which he never did, though the Blu-ray does include an interesting snippet of a 1985 Allen interview in which he expresses his desire to do a big-screen "Lost in Space" movie).

A big reason "Lost in Space" couldn't keep up with "Star Trek" in terms of legacy may have been the fact its first season was in black and white, which lessened its appeal to new audiences when the show was syndicated in the 1970s (a limitation "Star Trek" did not have). Where "Trek" grew into a multimedia franchise, "Lost in Space" became more of a fondly remembered cult classic.

The first season actually takes itself pretty seriously (aside from obvious budgetary constraints in the costumes and sets). Set in 1997, the Robinsons blast off from Earth, but their ship is sabotaged by the mischievous Dr. Smith (Jonathan Harris), and they end up landing on a strange planet where they'd spend the entirety of the show's first year. It's in the second season the show switched to color, and the third season when the show really started using the story device of hopping from planet to planet. The second season also adopted a campier tone to try to compete with the "Batman" TV series, and episodes became more focused on the interactions of Will, Dr. Smith and the family's Robot (performed by Bob May and voiced by Duck Tufeld). Interestingly, Smith and the Robot weren't even part of the show in the original pilot episode (included on the Blu-ray), which was re-constructed to add the new characters.

Scientific and technical details are often glossed over, and the turned toward camp culminates in the infamous episode toward the end of the show in which the Robinsons face off against a talking alien carrot ("Star Trek" had its cheesy moments, such as discovering Abraham Lincoln floating in space, but nothing approaching that level of zany).

However, what makes the show work is the strong family dynamic, as well as Harris chewing the scenery with a comically over-the-top performance, though Smith's tendancy to come off like a complete asshole from time to time is a big detraction in retrospect. The episodes are often a lot of fun and look great in HD, although the sound quality tends to vary owing to the mix of the original episodes. The show's format of employing cliffhangers to lead into the next episode lends itself greatly to binge viewing. And it's a hoot to hear some of the early music of the great John Williams, who a decade later would win Oscars for composing the music of such films as Jaws and Star Wars.