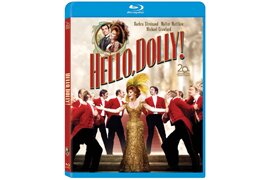 The Blu-ray of 20th Century Fox’s onetime studio-buster is resplendent enough to rate a “don’t-miss-this” nudge if you’re prejudiced toward the material, which did after all, serve one of the most successful stage musicals of all time. And besides, this prodigiously costly screen extravaganza honed of a fairly modest story has always been burdened with something of an undeserved bad rap — though one can understand how such a critical ball got rolling at a time when Dolly! proved to be emblematic of all that was wrong with the industry when real-life political events were making “old school” seem mighty quaint.

Filmed and then delayed in its release when there was already strong evidence that The Sound of Music demographic simply wasn’t going to be any long-haul arbitrator of which movies mattered and which didn’t, Dolly! managed to lose money despite healthy grosses and since has been dumped upon as one those white elephant late-’60s musicals that almost destroyed Hollywood. Actually, that era’s Funny Girl, Oliver!, Finian’s Rainbow and Darling Lili — respectively directed by William Wyler, Carol Reed, Francis Ford Coppola and Blake Edwards — have never needed any apologies, while Camelot, Paint Your Wagon and Star! are indeed abysmal fanny busters or worse (though the last may have engendered the best soundtrack LP of any bad musical in history). Dolly! occupies a kind of high-end middle ground along with Goodbye, Mr. Chips (redeemed some by super lead performances) and On a Clear Day You Can See Forever (it a maddening whiplash between the dull and the musically/visually brilliant).

With this new hi-def Dolly! delivering all the way on what 65mm TODD-AO could do, director Gene Kelly’s cosmetic stunner remains undercut by the always middling Jerry Herman score and less than sizzling supporting cast. Yet a young Barbra Streisand (all Mae West-ed up rather successfully) and Walter Matthau are able to elicit chuckles merely by showing up together in the same frame, and even the on-set still photos of them are kind of funny. If the “straight” 1958 screen version of Thornton Wilder’s source The Matchmaker has an even better cast (Shirley Booth, Anthony Perkins, Shirley MacLaine, Paul Ford, Robert Morse), it, too, is no less alternately sweet and strained. At least Kelly’s take has some certifiably socko production numbers, including “Put on Your Sunday Clothes” and the title tune (for which even the carpet cleaners must have charged a fortune). In the latter centerpiece, Louis Armstrong anachronistically shows up to reprise a tune big enough to have knocked the Beatles out of their No. 1 domicile on the Billboard charts. I can remember people at the time going, “What the hell is this?” over the prospect of seeing Louis show up in 1890. Today, we’re just grateful that he and Babs in co-performance (and photographed by Harry Stradling Sr.) simply exists.

Widow Patricia Ward Kelly is the centerpiece of a Blu-ray featurette built around divulged-to-her remembrances about husband Gene’s labors on the project, which did not prove pretty after he took over from another director when the project was already taking in red ink, Titanic style. Looking at the massive “Before the Parade Passes By” number here, one’s dual reaction is to utter a “man, that’s some day of work” — followed by a lament that the obscene budgetary overkill could have funded a lot of hunger programs. All Kelly likely could do was to keep the train on the track — and yet, Dolly! is easily the best of the mostly miserable solo projects he directed after parting ways with Stanley Donen. Worth a further nod is the class with which Ward Kelly has labored to keep kindling her husband’s flame. By contrast, all Fred Astaire’s widow has done is attempt to charge you a finger or a toe if you want to run a Fred clip in a documentary.