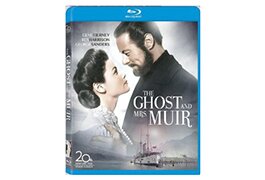 Lovely, and that’s really the word for it, 1947’s Ghost was one of the handful of movies directed by Joseph L. Mankiewicz that he didn’t script, though the screenwriter, Philip Dunne, was first-rate (he of How Green Was My Valley and Kiss of Death). Before we go any further, though, this very affecting movie — boy, you’d have to be a noodge not to like it — is pretty well made by Bernard Herrmann’s score, which is one of his best. In fact, it probably is the best of his romantically bent backgrounders, though I also have a special place for his work on Nicholas Ray’s mean-streets noir/rurally passionate hybrid On Dangerous Ground. The music/orchestration here gets you right from the beginning and also gets to you during a wrap-up that is … well, lovely.

A little more than two decades after its release, NBC took the bones, updated the story to New York from early 19th-century London, and turned Ghost into a modest two-season hit, the second one on ABC. The stars were Hope Lange and Edward Mulhare — he an actor who, when I was a kid, used to do a lot of stock company stage work playing Henry Higgins in My Fair Lady. This offers a hint of who has the original’s male lead — Rex Harrison himself as a deceased sea captain whose vocabulary (not that the Production Code was ever going to allow us hear it) is apparently a lot saltier than “blast!” Instead of just going off and hanging out with some of those long-deceased Biblical characters from Dunne’s script for The Robe, Harrison’s handsome captain is rumored to be hanging around as a spirit in the seaside cottage he formerly owned. This is indeed true, as the widow who rents the place (Gene Tierney) is soon to learn.

Herrmann’s score goes along from the get-go to make us take the premise seriously and not making the thing play like an Abbott and Costello vehicle or one of the dopey fantasy TV comedies from the ’60s. Tierney doesn’t exactly regard Harrison’s presence as everyday business-as-usual, but neither does she get bug-eyed frightened over the situation. And even a ghost with a temper is probably preferable to the London alternative she left behind: nagging female relatives who could use a where’d –that-come-from goose from a ghost of their own. A subsidiary character (very small role) is a Tierney daughter played by Natalie Wood, whose breakthrough child role in Miracle on 34th Street hit screens the very same month. (Can you believe Miracle was a May release? Marketing was a lot different in those days.)

At about the halfway point, the story gets a shot in the arm by the appearance of a children’s author played by George Sanders — who, of course, gets one look at Tierney and assumes that widowed Tierney isn’t being fulfilled (if he only knew his competition). Meanwhile, Tierney and her ghost kind of hit it off in one of those relationships that can’t go anywhere on this planet — something a little akin to the lost-cause situation facing Bing Crosby and Ingrid Bergman in The Bells of St. Mary’s. I said a few weeks back that I thought The Uninvited (recently from Criterion) was my favorite ghost movie, though this one is absolutely in its class. But though there’s a ghost, he isn’t too concerned about shaking up the day (or nights) of anyone, and the result here has more the feel of a time travel romance.

Tierney is luminous — and yes, this is another of her movies from the ’40s that got its cinematographer an Oscar (Laura and Leave Her to Heaven were all-out winners in consecutive years, the first in black-and-white, the second in color). Behind the camera here was Charles Lang, Jr., who at the time was a Paramount stalwart but borrowed by Fox for this picture. He tied with Leon Shamroy for the most cinematographic Oscar nominations ever — 18 — but could have been the solo champ because he wasn’t nominated for Frenchman’s Creek, which is one of the greatest three-strip Technicolor achievements of all time.