Get the Gringo (Blu-ray Review) 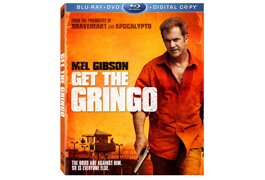 Mel Gibson goes back to his action roots in Get the Gringo, in which he plays the eponymous gringo locked up in a Mexican prison.

A career criminal, the nameless gringo gets caught south of the border with his multimillion-dollar take. The corrupt Mexican cops take his money and throw him in a prison known as El Pueblo. Here, the prison runs like a mini city from hell, where both men and women are serving time, children can go in and out, and the criminal world still has its pecking order.

He quickly befriends a 10-year-old whose father was killed by Javi, the inmate who runs the joint, and whose mother is still there serving time on drug charges. Were it not for the boy and his own quick-thinking and felonious ways, the gringo could’ve easily been lost in the notorious Mexican prison system. But this bad guy with a heart of gold saves his own skin, giving the bad guys their due and helping the good guys win.

This fast-paced action-thriller-comedy keeps you on the edge of your seat with equal amounts of chuckles and violent shootouts along the way. It’s a fish-out-of-water scenario without being silly or stereotyping.

Most endearing is Kevin Hernandez as the precocious kid. He convincingly plays a tough kid with street smarts while still being cute.

Also helpful is a cast who is actually Mexican, speaks Spanish and has authentic accents when they speak English.

A making-of featurette was made the way it should be, with the filmmakers giving interesting insight on the movie’s inception and development with scarce back-slapping and gushing.