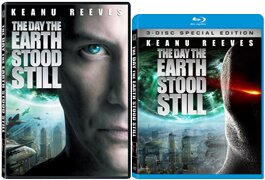 The Day the Earth Stood Still

Despite the protests of purists, a remake of the 1951 sci-fi classic The Day the Earth Stood Still was probably inevitable. The film’s theme of human technology outpacing the collective soul of its creators is just as relevant today. Who could resist the urge to give the story the sheen of a modern CGI enhancement?

The remake’s setup, with its biblical overtones, is largely faithful to the original, with Keanu Reeves perfectly cast as the new Klaatu, an alien sent to Earth to threaten annihilation if we don’t change our destructive ways.

Of course, the old movie was about aliens concerned with nuclear proliferation and the potential of war among the bickering nations of Earth. While this issue may have shifted focus in the past half-century, it hasn’t waned. Nonetheless, the new film is focused on environmentalism.

Without making an overt case about specific environmental issues, Klaatu states that humans are destroying Earth, which must be protected since it is one of a few planets capable of supporting complex life. If humans don’t change, he declares, some species will be preserved, and then everything else will be wiped out (I wonder how much THAT would impact the environment).

Klaatu’s argument is remarkably short-sighted for an ostensibly advanced race. So much so that a few simple and obvious words from one of the world’s top scientists (John Cleese) seems to be enough to change his mind. Such profound insights would probably not really be reserved to one man, but this film seeks to slide the scale down a tad, reducing its bevy of brilliant scientists to beggars who seem to be at a loss for words.

The original film did not offer much in the way of apocalyptic visuals, just a few scenes of the robot enforcer Gort blasting tanks. But in today’s Hollywood, threats of oblivion are a recipe for an orgy of special effects. In the new film, Gort is composed of nanites — microscopic bugs that swarm the landscape and consume everything in their path, much like the biblical plague of locusts. How they know not to consume everything, including the planet itself, is not explained. Also left untouched is the notion that a race technologically advanced enough to create such creatures would probably be able to terraform many a planet to sustain life, thus rendering its concerns about Earth moot.

The whole film is brought down by such oversights, perpetuated by a pseudoserious screenplay that overly simplifies the complexities of human interaction. The cast is effective in doing what it can with the limited material.

The main problem may be the film is overly reliant on its visual effects to create a sense of awe it can’t quite achieve. The destruction of landmarks, a trademark of these kinds of films, is limited to a few buildings that in real life are set to be demolished anyway, such as Giants stadium.

The extras on the DVD are almost more entertaining than the movie.

“Re-imagining The Day” begins with a brief analysis of the original film before morphing into more of a traditional making-of featurette. More interesting is “Unleashing Gort,” in which the filmmakers explain how they went about redesigning the iconic robot from the original film, through designs that looked nothing like it, to the final product that is basically a slick CGI version of the old design.

Two more featurettes play off key motifs from the film. “Watching the Skies: In Search of Extraterrestrial Life” is a straightforward documentary about UFOs and the potential for finding aliens, and “The Day the Earth Was ‘Green’” offers a look at the ecological techniques used to make the production carbon neutral.

Less helpful is a monotonous commentary from screenwriter David Scarpa, punctuated by long stretches in which he doesn’t feel the need to speak. The writer seems hampered, ironically enough, by his inability to tell a story.

For example, he interjects that child actor Jaden Smith’s father visited the set during an emotional scene, but never bothers to mention the boy’s father is Will Smith, or what else he did during the visit.

Scarpa mostly just explains the rationale behind his script.

The filmmakers’ sense of wonder flattens out at a level far below what audiences are looking for. The average moviegoer is probably smarter than the supposed geniuses in this film, who cavort around as if they’ve never seen an alien invasion movie. You’d think at least one of them would have seen the original, which, fortunately, is included with the Blu-ray and DVD special editions for easy comparison.