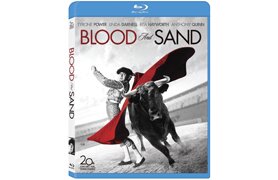 There’s Technicolor beauty to burn in director Rouben Mamoulian’s remake of the Vicente Blasco Ibanez bullfighting warhorse, and I’m not just talking about John Carradine captured in 3-strip. To a Blu-ray degree I’d never fathomed in previous viewings, here's one of the absolute hallmarks of Hollywood Golden Age pigmentation, and the narrative (though leisurely to a fault) moves at a somewhat more absorbing clip than I’d remembered. I have a friend who maintains that the 1941 movie year has no reason to harbor an inferiority complex when compared to the more lauded 1939’s, and he may be right. This isn’t one of the year’s true frontrunners, but the Oscar it got for color cinematography (Ray Rennahan, Ernest Palmer) is no lie. Some people make it on looks, and so do some movies (this lost the art direction to Oscar to Metro’s Blossoms in the Dust, but I’m not so sure this wasn’t a raw deal).

Blood and Sand was, of course, previously a famed vehicle for Rudolph Valentino during his comet-like career — which may or may not have had something to do with the casting here of Alla Nazimova (whose real life closely interlocked with Rudy’s) as lead Tyrone Power’s mother. Her character isn’t always scrubbing floors but almost seems to be — her lot in life after having been widowed by an irresponsible matador and giving birth to another in what becomes a rags-to-riches-to-(almost)-rags-again saga once her literally illiterate son finds financial success compromised by the usual leeches and hangers-on who become part of the package. What’s more, the guy can’t even remain faithful after marriage to his childhood sweetheart (or the closest he came to having one).

After a too-long prologue like the one in William Wellman’s fine and definitive version of Beau Geste, the sweetheart is played by Linda Darnell when she was still in her impossibly-beautiful stage — though, truth to tell, I always preferred her after she matured a bit on screen and proved to be an underrated actress (as in A Letter to Three Wives). Darnell weds Power when he still has nothing more to his name than a terrible pan in the press by the sporting community’s foremost bullfighting critic (corpulent Laird Cregar, really putting the lard in Laird). With eventual success — at which point he still has to put up with what might be the most corrupt journalist ever portrayed on screen — Power is then pursued by an elegant groupie played by another impossible beauty: Rita Hayworth during that roughly four-year period when home base Columbia Pictures was still loaning out her services to other studios. As Cregar puts it in one of his character’s few likable moments, bullfighting may be “death in the afternoon,” but predatory Hayworth is the same thing in the evening.

Though Mamoulian had a nimble run over the first five years of the talkies, he never made a movie I really like after 1933’s Queen Christina, though this one is so visually splendid that I have to at least half-augment that opinion. The scenic design, which could serve as the final in someone’s geometry class, really gets a Blu-ray boost here, and if the result sometimes looks a little “waxy” (a great term used by DVDBeaver.com’s invaluable reviewer Gary Tooze), I think most Fox Technicolor pics of the era looked this way (Leave Her to Heaven was kind of an exception to this). That it enhances the lead performers’ beauty (Power’s as much as anyone’s) is part of its Movie-movie power, and if one can fully understand why the grimy Nightmare Alley was easily the actor’s favorite film at what was his own home-base studio until very late in his career, this is probably Power’s definitive “clotheshorse” vehicle.

The Fox Technicolors of the 1940s were heavily weighted toward musicals, but somehow I don’t envision too many Betty Grable Blu-rays on the Blu-ray horizon (though Alice Faye, Carmen Miranda and those bananas in The Gang’s All Here would seem to be an eventual lock). So with a Wilson (as in Woodrow) release unlikely because Fox just brought it out as an on-demand title — and Leave Her to Heaven already just out from Twilight Time — this high-def release may remain something of a novelty in terms of the “Fox look” at its greatest. Gang’s aside, perhaps the most logical future Blu-ray candidate might be the decidedly non-musical The Black Swan, which came out the year after Blood and Sand and took another Oscar for cinematography. Like Gene Tierney, Power had the kind of face that got cinematographers nominations — but whenever he’s not in the ring, the women tend to take over here. And Mamoulian, earning our thanks, isn’t reticent to give them some fabulous close-ups.