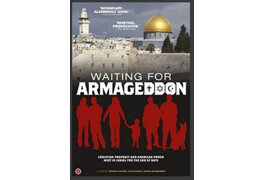 Running Out the Clock

So, is there anything to all those stories about the end of the world? When it comes to prophecies laid out in the Bible, the stories are not only believed, but by people who may be more influential than one would think.

First Run’s Waiting for Armageddon (DVD $24.95) profiles such people while describing the circumstances that are supposed to portend the end of all things. For the most part, the warning signs involve war in the Middle East. It’s a bit disconcerting to listen to some of the true believers actually rooting for strife, thinking it will set the stage for the rapture that much quicker.

The evangelicals consider Israel to be the key to the end times, and befriend Jews hoping to convert them. They also talk of removing the Dome of the Rock mosque from the Temple Mount and build a new temple to herald the return of Christ. One subject even takes delight in photoshopping the Dome out of a group picture.

At the same time, it’s kind of sad to listen to fundamentalists expressing regret that the rapture they believe is coming will take them so young.

The documentary examines the motives of these people in their actions and draws the line about what it really means to have faith. This is a study of religious prophecy and conflict, and how the various players are jockeying for position to take advantage of the end of the world.