Triumph of the Wall (DVD Review) 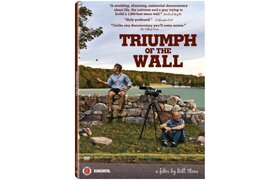 To some, watching a documentary about a guy building a 1,000-foot stone wall by hand using only carefully arranged rocks and boulders might be as exciting as watching paint dry.

Luckily, Triumph of the Wall features photogenic Chris Overing, a free-willed Canadian jack-of-all trades who apparently tends to the expansive farm of a wealthy anonymous owner outside of Montreal.

It’s September 2001. Armed with the idea (and landowner’s backing) to construct the wall in two 500-foot sections on either side of the farm’s entrance, Overing believes he can complete the project in two months, nevermind the fact that he’s never built a wall before. You get the sense Overing has what it takes to be a “dyker,” as they call stone wall masons in Scotland.

By a chance encounter in a local watering hole, Overing meets documentarian Bill Stone, whose career of filming corporate videos has left him wanting to “wall-in” in what has been a meaningless career. Stone, in extensive voiceovers, believes the wall and Overing can bring purpose to his cinematography.

And thus begins a reality-TV program uniquely void of the requisite drama found in the genre — unless, of course, you find
Overing’s overarching indifference toward the project’s greater meaning, yet stubbornness to use only a particular rock to fill a hole or gap, maddening.

Helpers — and time — come and go, including two humorous new-media graduate students who come to appreciate the virtue of manual labor, while also insisting that their services mandate a $2 raise from the $10/hourly rate.

Late in the film, Stone takes a sojourn to Scotland, where he meets two dykers who help bring a sense of understanding to the vocation and closure to Overing’s wall — a perfect ending of sorts since it’s 2006 and the wall is only half done.