Smiling Through the Apocalypse (DVD Review) 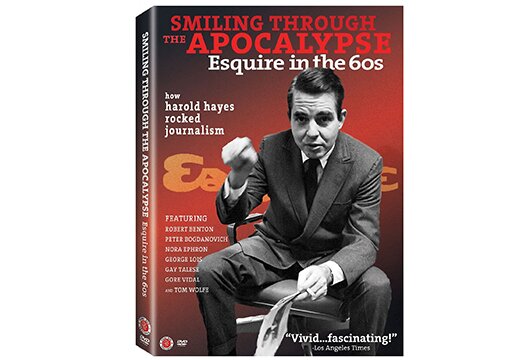 If you include the bonus section’s extended interview that is, by itself, more fun than most of the full-length features I’ve seen this year, the late Gore Vidal (whose gay-dom was never in much dispute) refers to William F. Buckley as a “queen” three different times here when recounting the libel suit/countersuit between National Review’s editor and himself. The precipitating article appeared in the pages of Esquire magazine, whose ’60s history is this doc’s official subject at hand, though the show is sometimes stolen by the superstar mystique of those interviewed on camera, including “New Journalism” practitioners Vidal, Tom Wolfe, Nora Ephron, Gay Talese and even Robert Benton — who, before he co-wrote Bonnie and Clyde and then became an Oscar-winning director, was art director for the magazine during its heyday.

As heydays go, you couldn’t beat Esquire in that counterculture decade, and the Southern gentleman pulling the strings was handsome Harold Hayes out of Wake Forest. Apocalypse, which shares its title with a well-known published anthology of Esquire writings from those very days, is directed by Harold’s son Tom. In this regard, this project brings to mind Danny Tedesco’s rock documentary The Wrecking Crew (about his father’s participation in that band of legendary studio musicians), which Magnolia Films is just bringing to the home market as we speak. The younger Hayes’ Esquire remembrance is one of those labors of love that one wishes were even more fleshed out, but if you care about A-team writing and are a junkie about the epoch covered, there aren’t many more ticklish 90 minutes around right now. Hearing Vidal mimicking Buckley with brutal precision and even reptilian tongue flicks is, just by itself, worth even paying list price.

Writers loved writing for Hayes because he mostly ran them unfiltered, simply didn’t care about micromanaging the arrangement of their paragraphs and (from what Talese says) must have been generous with expense accounts. His editor’s sense of the outrageous extended to his assigning (among others) William S. Burroughs and Jean Genet to cover the 1968 Democratic Convention in Chicago. And he gave photo editor George Lois total freedom to design the wincingly provocative magazine covers, which routinely elicited “did-you-see-that?” reactions and the predictable canceled subscriptions. To name three, just about anybody who was around and reading at the time remembers: My Lai perpetrator Lt. William Calley smiling with a group of somber Vietnamese children; Muhammad Ali pierced with arrows San Sebastian style over political reaction to his bucking the draft; and thuggish Sonny Liston (whose hash had Ali had previously settled) wearing a Santa Claus cap.

The documentary is divided into evenly delineated morsels (there are quite a few DVD chapter stops), and one standout subplot is Hayes’s rivalry with Clay Felker over who might get to succeed Esquire publisher Arnold Gingrich. Unsuccessful Felker eventually exited and certainly rebounded by helping to start New York magazine — and marrying actress Pamela Tiffin (to whom an ex-boss of mine once cheekily penned what used to be called a “mash note” from the other side of the country) was no shoddy sweetener. But New York started publishing the same kinds of journalistic pot-stirrers, and lot of air went out of Esquire’s balloon, as it eventually did as well at Harper’s where Hayes’s fellow Southerner Willie Morris was, for a while around the same time, also editing up a storm.

Even if Apocalypse ends up playing PBS or some other venue, it will likely be missing the three extended interviews that make up the bonus section. In addition to Gore’s goring of Buckley, which I wouldn’t have missed for the world or even Pamela Tiffin, there are sit-downs with a graciously accommodating Ephron (she is missed) and a longer personal recollection of how Talese came to write the not exactly pro-Francis "Frank Sinatra Has a Cold," which ranks way up there with both the author and the magazine’s best. I had either forgotten or did not know that the piece’s chronicled victim of harassment during one of Frank’s bad moods was writer Harlan Ellison at a time when he was less recognizable. In this case, the two were strangers in the (pool room) night, and their meeting didn’t work out too well. Though it certainly did for Talese’s career.