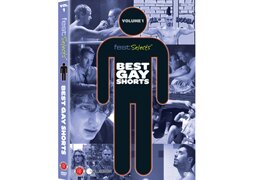 “Best” gay shorts? Sure, about half of the time. This collection of eight award-winning gay short films excels in its first half and falters in its second half.

“After” deals with gay teen boys who all fantasize about the same hunk, watching him play football, until it takes a tragic turn. Despite its subject matter, the short is somewhat breezy and relatable. “Bedfellows” is charming, as Bobby trudges back to the gay bar where his heart was broken, only to end up in a one-night stand — or is it?

The next two films are the set’s gems: “Curious Thing” plays like a touching narrative documentary, packing in a film’s worth of drama as a montage with voiceover, in which two straight boys fall in love, only one of them ends up being actually gay and the other, not; and “Gayby,” an absolutely hilarious film about a gay man and his fag hag who decide to have a baby together — the old-fashioned way.

The rest of the set’s films are hit-or-miss. “Gaysharktank.com” has an intriguing premise — it’s less a narrative film than a series of ultra-brief interactions between people on a gay “chatroulette”-type site, but its somewhat narrow-minded jokes quickly outstay their welcome over a too-long 15-minute run time. “My Name Is Love” deals with the very serious issue of rape in the gay community, but does so inconclusively to the point that it feels overly harsh. “Mouse’s Birthday” is an amusing but bewildering cartoon, and “Steam” is an erotic but somewhat hamfisted tale of two men who have a sexual encounter in a steam room that may end up actually being hell.

Still, this is a welcome set in that its strengths outweigh its weaknesses, showcasing some of the finest shorts that gay film has to offer.