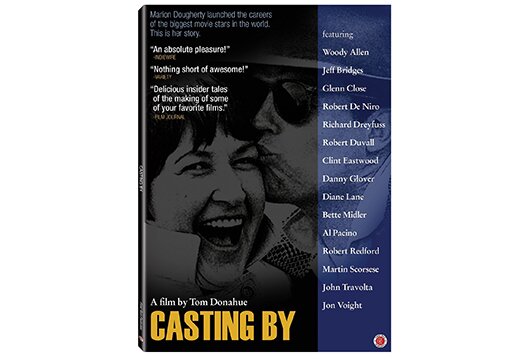 At the time this irresistible documentary primarily concerned with the late Marion Dougherty was shooting, the Oscars did not recognize casting enough to come through with its own awards category — and, in fact, denied Dougherty a special Oscar in her final years despite a campaign of support mounted by the likes of Clint Eastwood and Woody Allen. Nice. But at least the Board of Governors has since created a branch for casting directors (a viable first step in making recipients a future possibility), and it would be nice to think that Tom Donahue’s HBO-aired Dougherty portrait had something to do with it.

To me, the period from 1967-76 (before Star Wars and a few other subordinate happenings destroyed mainstream movies) is the most exciting in American screen history. And a lot of it had to do with films in which every role seemed impeccably cast — and not just with actors who were household names (though some eventually became just that). Until then, before the studio system collapsed, the majors had their own talent rosters (hell, even Republic did) that could be recycled from picture to picture based on, say, which actor looked best in historical costume or carrying a sword. To my mind, Dougherty changed things most dramatically with Midnight Cowboy, whose casting remains thrillingly on point, though before that, so had The Graduate. The latter enabled Lynn Stalmaster to gain sole screen credit amid what was still a relatively new profession before Dougherty was able to do the same — and the fact that I saw The Graduate 15 times in its first-run engagements got me acquainted really fast with Stalmaster’s name (his brother Hal had had the title role in Disney’s Johnny Tremain a decade earlier).

A lot of the new world order had to do with using edgy New York actors who did not look like conventional screen types, though every once in a while a walking yearbook photo like Robert Redford or Jon Voight would make the cut. You can see Voight here in footage from TV’s “Naked City” from the early ABC 1960s — an inclusion, like others from “Route 66” over at CBS, in the cornucopia of clips that make this documentary so much fun to watch. By the actor’s own admission, he was terrible in the role that’s excerpted — yet Dougherty remembered him and later let her gut instincts (a key component of her genius) push for him against opposition when it came to Cowboy’s Joe Buck role. Today, it is impossible to imagine anyone else in the part, and it’s a warm experience hearing the now reactionary Voight (who could use some good publicity these days) recall the story.

Anecdotes by big names abound, be they other casting directors (Stalmaster, Juliet Taylor); former production chiefs (e.g. David Picker, producer of Juggernaut); directors (Norman Jewison, Woody Allen) and all kinds of actors. Like Voight, Jeff Bridges wears his own hair shirt when discussing his performance in 1970’s debut gig Hall of Anger — though he, too, got a second chance by a casting director who rolled the dice for him on better projects. Bette Midler got off the islands after earning transportation for her unlikely bit part in George Roy Hill’s movie of James Michener’s Hawaii (and you can see her in a crowd scene, a huge surprise to me). Even good old Ed Lauter, since deceased, appears on camera to recall an ingenious scheme he came up with to arrange a meeting with Dougherty. De Niro, Redford, Duvall, Pacino, Eastwood are here as well, as is Diane Lane because Dougherty took a chance on her for a childhood teaming opposite Laurence Olivier himself in Hill’s A Little Romance (good move; Lane made the cover of Time when the film came out).

Dougherty got along well with Hill (her first on-screen credit was for The World of Henry Orient) and presumably all directors, so it’s something of a shock to see Taylor Hackford coming off as something of a heavy here as one who has used his position with the academy to prevent casting from getting its own Oscar category. This said, his recalcitrance does come off more as an honest difference of opinion than something worse, but the failure to give Dougherty at least a special Oscar must have been temporary insanity. Hackford maintains that since the regular director has final say about who and what appears on screen, awarding a second person for casting is unnecessary or redundant (really? — art direction, anyone?). But it would seem that once a consistent resumé stretches out over decades of en masse performing excellence, it is its own Exhibit A. Or A-list.