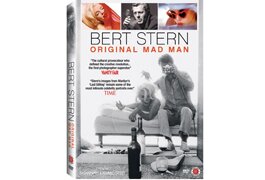 After a year-and-a-half of hopping around from festival to festival, writer/director Shannah Laumeister’s documentary on a true photographic genius (and her longtime lover to boot) got a brief theatrical run this past April, not quite three months before its subject died on Jun 25. This isn’t as dramatic as the recent documentary on Edward Koch having opened in theaters the very day the former New York City mayor passed away, but it does intensify one’s appreciation factor: i.e., that Laumeister’s portrait of her longtime companion ultimately got made and now exists for the record.

Stern was known for a lot of things — most prominently, I would guess, the series of those semi-nude Marilyn Monroe photos that were shot just weeks before the actress’s death and first published, by coincidence, the Monday after that August 1962 Sunday (certainly a day I’ll never forget). While it is true that Stern was at least one of the original Mad Men (it is said the Smirnoff ads built around his photos put vodka on the map in this country), this is not the direction Laumeister goes — or at least not the main one. This is more of a look at a guy who couldn’t find a way to enjoy professional success, and if Stern wasn’t clinically depressed during the filming here, he gives a pretty fair imitation of someone who was — lamenting on camera that the happiness he enjoyed as a young man didn’t carry over to life during his 80s. And this is from someone who successfully reinvented himself after a long period of poverty and middle-aged flip-out — also one who was companion to a gorgeous woman 40 years his junior and one he met when she was a very young teenager on a skateboard. This manages to be even more interesting than the fact that Stern used to hang out with Stanley Kubrick were both were young (he later came up with those iconic heart-shaped glasses Sue Lyon wore in Kubrick’s screen version of Lolita).

This is probably not the documentary that would have resulted (assuming Stern would even have cooperated) had an outsider attempted to film it, which is another way of saying it is unconventional in ways that will not be appreciated by all yet certainly will be by some. In terms of offspring who apparently had to adapt to dad’s way or the highway, the picture reminds me a little of Bruce Weber’s unforgettable look at Chet Baker (Let’s Get Lost) — which is another way of saying that Stern must not have won too many father-of-the-year awards (his ballerina second wife talks of him showing up at a court hearing in bare feet, though this was during a period when he had hit the skids).

Still, Stern is personable enough on camera and certainly isn’t overbearing. What’s more, it’s refreshing to see a photographer of great beauties (though Buster Keaton and many other non-sweater-girls were subjects as well) indicate that he lusted for at least some of them. In addition to shooting Marilyn, Stern was also the official photographer for Cleopatra — and was apparently among the first to predict the coming pyrotechnics between Elizabeth Taylor and Richard Burton at a point when the two had not yet even met. And in the one stab he took at film directing, he managed to come up with the greatest jazz documentary of all time, Jazz on a Summer’s Day — though there has always been debate over whether Stern or editor Aram Avakian was the film’s true auteur.

Throughout the documentary and in the DVD extras, we see examples of Stern’s work, and the recognition factor is almost enough to make one gasp if he or she is of a certain age. There’s a great bit where we see what Madison Avenue ads looked like before Stern came on the scene and changed the playing field; the “before” examples are so wretchedly bland that you wonder how anyone could have taken the money. Of course, for one of the ads that made his name, his employers had to cough up the fee for a trip to Egypt. It would be fun to see how far this budget-line item would have gotten at Sterling Cooper Draper Pryce.

New on Disc: 'The Jack Benny Program: The Lost Episodes' and more…