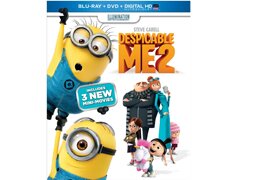 There’s nothing “despicable” about Universal Studios’ fourth-quarter fiscal fortunes, thanks to the ongoing retail success of animated hit Despicable Me 2, which features voices by Steve Carell and Kristen Wiig.

As previously reported, 'Despicable Me 2,' the follow-up to 2010's 'Despicable Me,' dominated home entertainment sales in 2013, including ranking No. 1 for five consecutive weeks (through Jan. 12) as the country’s top-selling DVD and Blu-ray Disc.

The title — along with Fast & Furious 6 and Les Misérables — helped increase studio revenue to $1.4 billion, up 4.9% compared with the fourth quarter of 2012. Operating cash flow increased $404 million to $483 million, compared with $79 million in 2012, reflecting the strong performance of the film slate and lower advertising, marketing and promotion expenses.

The revenue surge was in part bittersweet for Universal Studios Home Entertainment, which pledged to donate a portion of Fast & Furious 6 disc sales to Reach Out Worldwide, the charity championed by cast member Paul Walker, who was killed in an auto accident Thanksgiving weekend.

In the fiscal call, Smit said rollout of Comcast's electronic-sellthrough platform — a first for the cable industry — got off to a strong start with the availability of FF6 and DM2 over the Thanksgiving weekend.

Universal, which is releasing DM2 spinoff Minions in 2015, has slated Despicable Me 3 for theatrical release June 30, 2017.