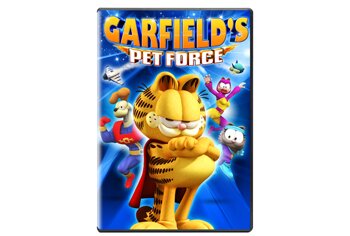 Garfield has been a newspaper comic mainstay for more than 30 years now, but don’t remind creator Jim Davis of the timeline.

“It feels like 30 seconds. It feels like I just got started,” 63-year-old Davis said. “I guess it doesn’t feel like so long, since I’m always changing hats.

“Maybe some day I’ll get it right.”

The latest attempt to “get it right” is an all-CGI film streeting June 16 from 20th Century Fox Home Entertainment, Garfield’s Pet Force (DVD $19.98). Based on a series of children’s books, spun off from Davis’ original comic strip, Pet Force follows Garfield, Odie, Arlene and Nermal into another universe, where they become the superhero-powered Pet Force.

This will be Davis’ third direct-to-video all-CGI Garfield feature, and he swears it won’t be his last.

“It does have greater production values. We’ve done all this stuff in-house, and the guys who [developed it] really did a great job.”

When he started doing CGI movies, Davis said he actually went out and read books about movie production, in order to treat the CGI films as live-action movies, instead of animations.

“The more I go to CGI, the more I get to distance myself more from Disney, because you’re always going to get compared to Disney, with their big budgets and grand, huge stories.”

The pets all have incredible powers in this latest adventure, but long-time fans of the Garfield world will still find that the not-so-bright dog Odie hasn’t changed much.

In the exclusive DVD-ROM game “Professor Wally’s Moscrambulator” included on the DVD, users can build their own superhero, combining the parts from the characters in the film.

“We had some real challenges with it,” Davis said. “’Normal’ is very different here.”

Davis is hopeful that his Garfield CGI movies will eventually make their way to Blu-ray Disc and to 3-D.

Up next in the Garfield world is a Christmas special TV series, for which Davis has just finished one of the scripts. By 2010, Davis hopes to have to have a Garfield musical and to launch another TV series.

“The discussions on the next direct-to-video release are ongoing,” he said. “There will likely be several more. There’s a lot of interest from a lot of friends in doing more.”

Davis said his biggest challenge with Garfield is letting go of the work.

“Garfield has a very strong personality,” Davis said. “If I’m not doing the script, I’m working closely with them. I’m only capable of producing so much content.

“That, and I’ve got a golf handicap to keep down.”