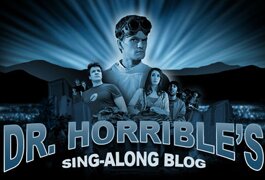 SAN DIEGO — Joss Whedon, creator of such fan-favorite TV shows as “Buffy the Vampire Slayer,” “Angel” and “Firefly,” has turned to the Internet for one of his latest projects.

“Dr. Horrible's Sing-Along Blog” is a musical adventure in which a supervillain (Neil Patrick Harris) hopes to defeat his arch-nemesis, Captain Hammer (Nathan Fillion), win his dream girl (Felicia Day) and join the Evil League of Evil. The show consists of three parts, runs for about 45 minutes and is available for download from iTunes for $1.99 per episode.

Whedon, the cast and writers discussed the project with fans during a panel July 25 at San Diego Comic-Con International 2008. He couldn't escape questions about whether the cancellation of his previous series, “Firefly,” after only 11 episodes influenced his turning to the Internet for a project.

Another fan remarked that Whedon's newest show, “Dollhouse,” scheduled to debut on Fox next year, already has fans making Web sites devoted to saving it.

“I approach things differently, and I take it one episode at a time,” Whedon said. “Any episode we get is a bonus, and then any episode we don't get out … I can make stuff on the Internet now.”

“This really was designed to be a model for a new way to put out media, a new form of artistic community that involves all of [the fans] and all of us and maybe not so much some other people,” Whedon said. “I'm an advocate of evolution over revolution. I'm not trying to bring down the studios. I do still work there … and I'm grateful for it, and I love ‘Dollhouse' and love what we're doing. But things are changing, and it's really important that we make sure that as they change, they change for the better, and ‘Dr. Horrible' is just a little bit about that — about putting that power in different hands.”

A downloadable soundtrack will be available within a few weeks, Whedon said.The creators said they are considering a fourth installment and are putting together extras for an eventual DVD release, such as a musical commentary called “Commentary! The Musical.”

Joss' brother Jed, one of the “Dr. Horrible” writers, announced a contest for fans to submit audition tapes of less than three minutes for the Evil League of Evil, with the top 10 videos included on the DVD. A distributor for the DVD was not announced.