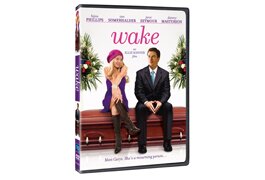 Bijou Phillips gives probably the best performance of her heretofore limited career in the morbid romantic comedy Wake (recently released by E1 at $24.98). She plays an emotionally detached woman who attends strangers’ funerals hoping to spark some kind of feeling. At one excursion she manages to catch the eye of a deceased woman’s boyfriend (Ian Somerhalder), after lying about knowing the girl. A comedy of errors ensues.

This set-up, apart from a few details, is basically the same as last year’s superior The Last Word, and Wake has an unfortunate habit of shifting between moments of sweetness and annoyance. But it’s interesting to see how the chemistry of real-life couple Phillips and Danny Masterson strengthens the film rather than distracts, as some off-screen pairings are apt to do.