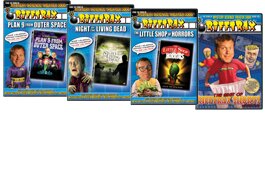 From the ashes of “Mystery Science Theater 3000” comes RiffTrax, which carries on the tradition of bashing famously bad films with a uniquely wry running commentary. Since 2006, former MST3Ker Michael J. Nelson has kept the concept alive with downloadable commentaries available at RiffTrax.com, but now is finally unleashing his attacks on DVD with offerings of select public domain films.

Nelson is often joined by his MST3K collaborators such as Kevin Murphy and Bill Corbett in throwing zingers at the screen, in many cases re-setting the film through a lens of current events. There’s really no reason any fan can’t do this, but these guys are pros.

The RiffTrax take is offered as a bonus commentary with the film. It’s not presented with the on-screen silhouette made famous by MST3K, though the spirit is there.

The initial selection in April included Reefer Madness (1946), Little Shop of Horrors (1960) and even George A. Romero’s 1968 classic Night of the Living Dead, which indicates just how irreverent this bunch is.

The latest batch of RiffTrax DVDs includes a compilation of educational short films, plus Carnival of Souls (1962), House on Haunted Hill (1959), Missile to the Moon (1958), Swing Parade (1946) and Ed Wood’s Plan 9 From Outer Space (1959), the latter of which is so bad, it could be funnier on its own without the commentary.