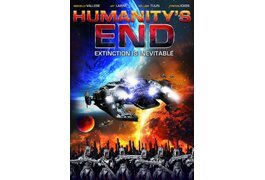 Sorry to disappoint those getting their hopes up, but humanity does not end in Humanity’s End. Set several hundred years in the future, the film postulates that after colonizing other planets, the resulting isolation would be enough that humans would evolve into different species, and naturally those species would want to kill each other.

The Nephilim have managed to destroy all of humanity except for one man and one woman. The last man suddenly finds himself running from the Nephilim, who must be admired for their dedication to completing a job in its entirety, while trying to protect the last woman, who is, unfortunately, called a “breeder.” His Han Solo impressions will be enjoyed by sci-fi fans disappointed by Harrison Ford’s appointment with the natural aging process.

One has to give this rather misogynistic film props for not turning into a “repopulating” breeding-fest. Add the fact that it focuses on the characters rather than the technology, and it would seem that you have a science-fiction tale that is above the norm.

However, the method by which the filmmakers do this is to make the  audience watch some petty drama between the characters while something important happens off camera. The entire battle to save humanity plays out somewhere in the background while a certain character takes his sweet time dying.