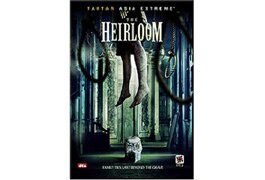 The latest Asian horror film from leading exporter Tartan has all the elements of a classic frightfest: a creepy old house, dead ghost children and lots of dripping liquids. You'd think by now filmmakers would tire of what is essentially the same plot, and so would audiences. Yet The Heirloom, a Thai film from Leste Chen, is one of those films viewers won't be able to turn off. They might have a clue about how things will turn out, but there's still a macabre desire to watch it unfold.

The story revolves around a young hotshot who returns to his native China from abroad to claim a house left him by ancestors he never knew he had. He becomes engaged to a young dancer and moves her in, and that's when things get strange.

Friends start showing up at odd hours, appearing disoriented and disheveled. Then, these friends start dying. Viewers can pretty much solve the mystery halfway through — hint: Don't go into the ancestors' shrine all the way up the stairs because all but one of those wacky Yangs wound up committing mass suicide — but that doesn't make it any less engrossing.