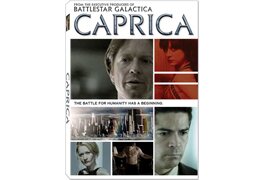 Since it debuted in 2003, the re-imagined “Battlestar Galactica” has quietly become one of the best shows on television.

In telling the story of space-faring humans forced to flee their colony worlds after a devastating attack by the Cylons, a race of robots that had been created to serve mankind, “Battlestar Galactica” set the stage for intense examinations of such relevant themes as war, retribution, racism, politics, science and religion.

As the epic run of “Battlestar Galactica” comes to an end, its legacy continues with the prequel series “Caprica,” a fantastic new expression of the franchise. Anyone who is a fan of “Battlestar Galactica” should enjoy “Caprica.” It has all the same dark overtones and richness of character that fans have come to expect from “Galactica,” but those just looking for more space battles should look elsewhere.

Executive producer Ronald D. Moore and his team have become adept at cranking out superior sci-fi. “Caprica” doesn’t feel like a TV pilot. It’s better than most sci-fi movies.

Set 58 years before the fall of the colonies, “Caprica” tells the story of two men — military robotics expert Daniel Graystone (Eric Stoltz) and mob lawyer Joseph Adams (Esai Morales) — united by a tragedy that forces them to reconsider the role of family in their lives. Each has a daughter who is killed during an act of religious-motivated terrorism.

Early scenes of teen angst may irk some viewers, but the effect is minimal and subsides quickly in light of the weighty story to come. Daniel discovers his daughter, Zoe, had created a computer avatar of herself — a near-perfect virtual simulation of her knowledge and personality. Daniel’s unbridled hubris pushes him to believe he can resurrect his daughter, and offers the same deal to Joseph, who has access to the technology that can achieve it.

This puts Joseph in the classic dilemma of Adam in the Garden of Eden: Bite from the forbidden apple, or leave well enough alone. Unlike Daniel, Joseph has another child to blunt his grief, his 11-year-old son William, who will grow up to command the Galactica on its exodus from the colonies.

Stoltz and Morales deliver perfectly understated performances as two men who emotionally are heading in opposite directions. Adams uses the tragedy to re-embrace that which matters most to him, his son and his heritage. He boldly proclaims his true family name, Adama.

Daniel, so caught up in his work, lets his grief corrupt him in the worst ways, and Stoltz is particularly effective in conveying a man not so much affected by his loss, but intrigued by its potential. With chilling detachment, Daniel moves forward with his research, which leads to the creation of the first Cylon, the consequences of which have already been determined. The devil is in the details.

In 1978, old-school “Battlestar Galactica” was often criticized as an emulation of “Star Wars” and its brand of good vs. evil space opera. The updated series managed to redefine that vision while remaining recognizable within the genre.

“Caprica” is again something different, evoking a feeling similar to Gattaca in its depiction of a potential near-future, while infusing elements of the “Matrix” and “Terminator” movies to set up a bridge to the events viewers know will unfold. It’s not the “beam me up Scotty laser tag fare,” to borrow a line spoken by Morales in one of the behind-the-scenes featurettes. There are no cuddly aliens here. No space battles. This is serious drama, and the DVD takes full advantage of its unrated platform, with sex and nudity and a grisly mob-style murder.

Though an edited TV version may have a similar impact, home video is really ideal for “Caprica.” The DVD of the pilot episode includes commentary and several behind-the-scenes featurettes that enlighten the audience as to the mindset of the show’s creators. More importantly, the disc contains several deleted scenes that play like Webisodes — short clips that may not fit into the movie’s narrative, but still provide interesting context and a deeper examination of the show’s philosophical undertones.

Were this simply another piece of speculative fiction about the future of humanity here on Earth, it would still be great, serving as a realistic morality tale of our own technological progress, the gradual blurring of the line between flesh and circuit, and the dangers of unchecked arrogance. Linking it to the “Galactica” mythos gives it an added subtext that both informs and enhances the action. Longtime fans will no doubt flock to the message boards to analyze every motif and allusion from “Galactica” that has been carefully layered into “Caprica.” The show even re-uses some musical cues from "Galactica" to further the connection.

It’s easy to see why Sci Fi Channel ordered an entire season before the pilot ever aired, and it will be interesting to see how the story unfolds when the series begins in 2010, and if an audience accustomed to the space-tech will have the patience to stick with it.

“Caprica” plays like an extended version of those “Galactica” flashback episodes that are almost always uniformly excellent. But familiarity with “Galactica” is not needed to appreciate “Caprica.” All that is required is an appreciation of the great potential that science-fiction offers in exploring the possibilities and pitfalls of our ingenuity.