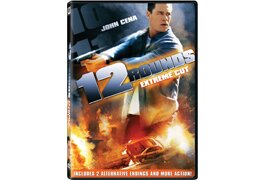 The plot of 12 Rounds is utterly preposterous, the dialogue is ridiculous, the explosions are so over the top Michael Bay might be jealous — and it was so much fun, I simply cannot wait to watch it again.

John Cena plays a New Orleans detective who is put through a series of physical and mental challenges to save the life of his fiancée (Ashley Scott of “Jericho”), who has been kidnapped by a terrorist (Aidan Gillen of “The Wire”) seeking revenge for the accidental death of his own girlfriend.

It’s like WWE meets the “Die Hard” films, which is hardly shocking since director Renny Harlin also directed Die Hard 2. Viewers who enjoyed (whether they will admit it or not) The Marine and The Condemned will find 12 Rounds equally entertaining.

For those seeking some insight into the making of the film, the standard-DVD version has a number of special features, including a commentary with Harlin, Cena and writer Daniel Kunka; two alternate endings; and two Cena-centric featurettes, “Crash Course: John Cena Stunts” and a “Never-Before-Cena gag reel.”

The Blu-ray Disc has all the bonus material from the DVD as well as four Blu-ray exclusive featurettes: “Streetcar Crossing: Film With Caution,” “12 Bonus Rounds: Making Magic Behind-the-Scenes,” “Keeping Score: The Music of 12 Rounds” and “Round and Round with Director Renny Harlin and John Cena.”