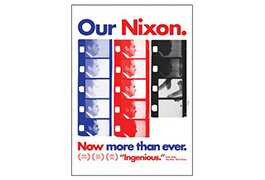 Documentarian Penny Lane’s political-junkie catnip, which offers an irresistible look at Richard Nixon’s presidency up to April 30, 1973, couldn’t even exist without a couple miracles (or at least highly unusual occurrences). First of all, there are the famous Nixon White House tapes, which provide a significant amount of the audio — and if you think that at one time their sheer existence didn’t surprise or even shock even most of the country, even most high-ups in the Nixon Administration didn’t know about the president’s office taping device. As for the visuals here, they only exist because White House Chief of Staff H.R. Haldeman and fellow senior officials John Erlichman and Dwight Chapin were home-movie addicts in the pre-video days when a lot of people were, and they had the cameras rolling for events big and small, including the breakthrough visit to China.

After Haldeman and domestic affairs chief John Erlichman resigned on April 30, the home movies (and thus this documentary) stop, but there are moments just in what’s captured that qualify as privileged, even for those who’ve seen all the Nixon chronicles and read all the Nixon books (as I just about have). One is when the tapes reveal Oval Office concern that National Security Advisor Henry Kissinger (he was yet to be Secretary of State) not be seated next to hottie female guests at official dinners because he tended to toot his horn at the expense of Nixon or tell too much. (I can’t recall if this was in Kissinger’s “Jill St. John period” or not.) Another — and an episode I remember very well — is when the Ray Conniff Singers (acknowledged as being “square” in the prez’s intro) performed at the White House and one of the femme members (worse, she was right in the front) chastised the president in public and implored him to halt the bombing in Vietnam. It’s quite an experience actually getting to see this, and you have to give old Ray some credit for staying professional and somehow getting the program started. There’s a nice shot of a blonde singer looking down at the text her brazen colleague is reading; her expression is a little ambiguous but doesn’t look unapproving. In any event, this was a major embarrassment at the time (LBJ had had his own such Vietnam-spurred incident earlier with singer Eartha Kitt), and reaction in official DC reflected the title of my favorite Conniff album: It’s the Talk of the Town.

Though the Super 8 visuals are what makes this a movie, it’s the White House tapes that make this documentary notable — and another jewel comes when Nixon and Haldeman are discussing Norman Lear’s “All in the Family,” which had just become a CBS sensation and a show that usually showed, as Haldeman notes, Rob Reiner’s so-called meathead of a son-in-law to be viewed as correct in almost all of the heated discussions over the quickly changing culture. This Republican hierarchy is, of course, offended by all of this, and Nixon gets on a rant about how homosexuality sank the Greeks. All this offers an unusual opportunity to hear Socrates and Archie Bunker alluded to in the same sentence, and especially by Nixon.

Other highlights include a Barbara Walters interview of Haldeman that I had forgotten — his first ever and what a coup that must have been at the time. (She asks him about his anti-’70s haircut, which looks as if it he got it at the Roger Maris Barber College.) And Nixon grousing (on the tapes again) that only a handful of Cabinet members called to congratulate him on a major speech he’d given. Nixon has often been called the gift that keeps on giving, and so are Nixon documentaries. The thing I can’t figure out is why someone hasn’t raised the money to restore and rebroadcast the Senate Judiciary Hearings that aired during the Impeachment process, which were the most dramatic things I’d ever seen on TV until maybe the Anita Hill-Clarence Thomas hearings or maybe the O.J. Simpson chase in the Bronco (which inspired Larry King to add when CNN was transmitting it, “a very popular model”).