Wings of a Warrior: The Jimmy Doolittle Story (DVD Review) 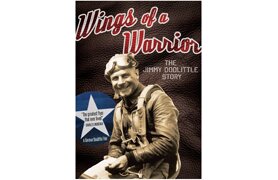 James Harold “Jimmy” Doolittle, a four-star general in the U.S. Air Force, has a lengthy list of accolades, from receiving a doctorate at MIT to earning a Medal of Honor. Wings of a Warrior: The Jimmy Doolittle Story chronicles Doolittle’s storied life from start to finish in 84 minutes.

A thorough biography, Wings of a Warrior begins with Doolittle’s childhood in Alaska and Los Angeles, but really picks up when the film turns to his love affair with aviation. In 1922, Doolittle earned a Distinguished Flying Cross for his record-breaking cross-country flight. He served in World War I, World War II and the Korean War, and received two Distinguished Service Medals, a Silver Star and two other Flying Crosses, among several other awards.

Doolittle is also renowned for his contribution to the development of instrumental flying and his famous study of the Central Intelligence Agency, dubbed the “Doolittle Report.” As stated in the documentary, officials wished to name LAX after Doolittle, but he declined since he thought the honor belonged to someone who was deceased.

As illustrious as Doolittle was, the documentary, unfortunately, struggles to capture the attention of its viewers. The sole voice in the film comes from its director, Gardner Doolittle, who is also the third cousin of Jimmy. Wings of a Warrior would have benefited from interviews with family members or those who served alongside him in the military, who undoubtedly could provide color to certain historical moments.

Included on the disc is a 10-minute director interview with Gardner recounting the first time he met the flying pioneer and his journey with bringing the film from script to screen. Interestingly, Doolittle himself approved Wings of a Warrior, as the two went page by page over the filmmaker’s notes.