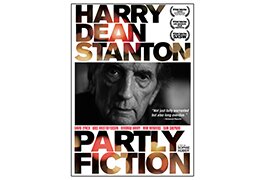 At just 76 minutes, Sophie Huber’s portrait of a remarkably durable character actor features more cover vocals by its subject than you might expect, but then Stanton has an extensive background as a singer, and the entire project takes a kind of backdoor approach to emerge as a satisfying tribute, if hardly a thorough one. Besides, HD’s renditions here of “Blue Bayou” and “Blue Eyes Crying in the Rain” are by no means of anti-pick-to-click caliber in terms of the feeling with which they’re delivered.

Of course, Stanton is not a guy among the easiest to peg, given that in the early 1980s he had a serious affair with Rebecca De Mornay, who was three decades and change younger — a revelation that all but had me doing a Danny Thomas “spit-take” of surprise when someone first told me of it many years ago. Stanton, who never married, makes only fleeting reference to it here, but the relationship apparently broke up when she went off to make Risky Business with Tom Cruise, and one thing led to another with her co-star. One gets the impression here that Stanton took it hard (well, wouldn’t you?), but he doesn’t come off as one who’s all that compelled to spill his feelings.

What emerges is a picture of a plain old good guy — one who has managed to maintain lasting relationships with buddies in various fields for life, including Jack Nicholson, with whom he was once roommates (another mind-boggler). Stanton is the kind of true-blue Kentuckian you would never see voting for nay of Mitch McConnell’s 87 chins, and a personal assistant notes that two brothers remained in their home state to raise families in a much more traditional environment while Harry went off to work with the likes of Wim Wenders and David Lynch. The latter, in an extended sequence here trying to interview Stanton, comes off as being much closer to the personality of the director who made The Straight Story than the other predominantly off-the-wall features that carry his name.

Of course, Stanton has worked so long and so consistently in more films than I remembered that it shouldn’t have surprised me (in checking IMDb.com) that right off the bat, he worked with Hitchcock twice: a bit in The Wrong Man and a speaking part in the great 1957 Richard Kiley telepic 4:00, which I caught at the time and still think deserves to be included in the director’s onslaught of formidable achievements during that period. Long before he got to the likes of Alien and Paris, Texas (both among several films excerpted in the documentary), his TV credits amount to a kind of ode to a misspent Boomer childhood: Man with a Camera, Rescue 8, Zane Grey Theater, The Adventures of Rin Tin Tin and the normally creepy Lyle Bettger’s unexpected foray into a heroic mode with Erle Stanley Gardner’s The Court of Last Resort (well, Raymond Burr played a lot of creeps before Gardner’s "Perry Mason" modified both his image and waistline).

In addition to the scene with Lynch, there are testimonials from Debbie Harry (who sang a song about Stanton), Sam Shepard and a laugh-filled caper with Kris Kristofferson to fill in the gaps of what Huber doesn’t cover. Throughout here, I kept seeing clips from films seen so long ago that I forgot Stanton was even in them — a case in point being Kristofferson’s screen debut in Cisco Pike, an edgy drug melodrama that got so little play at the time that I was forced to see my hometown’s engagement at a drive-in when there was snow on the ground. Kristofferson gives his buddy credit for paving the way, a nice way to wind down an unpretentious homage that is full of mostly pleasant tidings.