Classic Doc ‘Nanook of the North’ Heading for Blu-ray 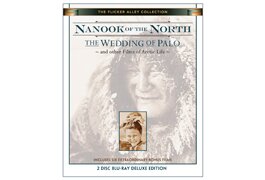 Flicker Alley will release the classic 1922 documentary Nanook of the North on Blu-ray Disc Feb. 26 as part of a two-pack with the 1934 film The Wedding of Palo.

Robert Flaherty’s Nanook chronicles Inuit Eskimo life in the Canadian Arctic. The film focuses on Nanook and his family, who re-created several aspects of their daily lives for the film, which was one of the first 25 films selected for preservation in the National Film Registry by the Library of Congress in 1989. The Blu-ray version was remastered in the correct speed from the 1972 restoration, with music composed by Timothy Brock.

Wedding, the last work by Danish polar explorer and anthropologist Dr. Knud Rasmussen, was filmed in sound with an Inuit cast from the Angmagssalik district of east Greenland. It tells the story of two men who desire the same woman as a wife.