Once Upon a Time: The Complete Fourth Season (Blu-ray Review) 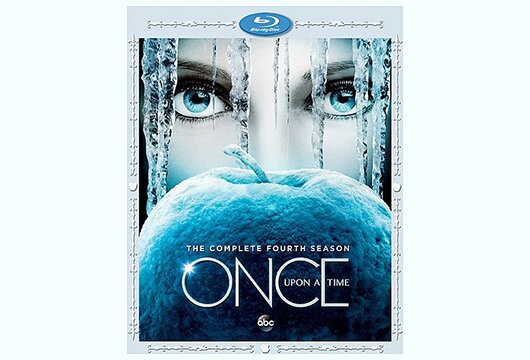 A cursory look at “Once Upon a Time” after four years reveals a fun show not too dissimilar from when it started, yet also one that has managed to evolve in a lot of ways.

The show, about the lives and adventures of famous fairy tale characters who turn out to be real people from alternate realms living in our world, in the magical town of Storybrooke. As such, the show has had a lot of fun exploring some of the darker edges to stories best known from their Disney movies.

But after a meandering second season, the show hit upon the idea to involve the characters in half-season story arcs themed around one particular tale. For season three, it was Peter Pan followed by The Wizard of Oz.

Now, the cross-promotional benefits of the show with the rest of the Disney brand should be fairly obvious. That’s not to say there’s any back-and-forth on the creative side of things. But someone with a cynical eye might point out that third season came during a year that saw Disney put its animated Peter Pan on Blu-ray and make Oz the Great and Powerful.

So, what does season four offer? Well, the back half of season four gives us a storyline with Maleficent, who was killed off in the first season, but resurrected here not long after the character appeared in a big live-action movie. There’s also the fact that the 101 Dalmatians Blu-ray was hitting shelves about the same time a story arc involving Cruella de Vil was kicking off.

But those are minor bullet points compared with the first half of the season, which was essentially just a sequel to Frozen. Not a warped version of the story typical to the other fairy tales depicted on the show. No, it was a full-on sequel, picking up right where the movie left off, with a few plot developments to bring the Frozen characters into contact with Storybrooke.

The most clever bit in that regard is the introduction of the Snow Queen, based on the darker character from the original Hans Christian Andersen story upon which Frozen is based. Here, she’s Anna and Elsa’s long-lost aunt, but she also has a connection to Emma (Jennifer Morrison), the savior of Storybrooke and the central character of the show.

The show's creators appear on multiple bonus features discussing how they were thrilled to get a chance to use the Frozen characters and were happy that Disney gave them permission. This was less than a year after the movie was in theaters, and when the story arc started at the end of season three, it was just a few weeks since the movie had been on disc.

Unsurprisingly, the primary extra is a featurette about how they brought Frozen onto the show. This is also covered in a commentary on the seasons first episode with Morrison and the show’s creators.

Whatever the impetus for the storylines, they don’t fail to be entertaining, and the writers do a decent job integrating all the fairy tale universes together. The journey of the sisters in Frozen, for example, calls attention to a lot of the character development of the regular characters. And the darker second half offers plenty of intrigue that tests the allegiances of everyone involved.

At the very least, the half-season arcs demonstrate the show has picked up a sustainable momentum. If one arc doesn’t work out, they can always drop it in favor of a different mythology. (Season five starts with Camelot. I’m sure rumors of a Sword in the Stone remake are just coincidence.)

Not to completely discount the conspiracy of the Disney overlords, however, the show has started to drop in references to “Star Wars” and “The Avengers” on a pretty regular basis, so don’t be surprised if twisted versions of those properties manage to take over a storyline down the road.

The Blu-ray offers commentary on several episodes, as well as deleted scenes and a few humorous featurettes, one involving a set tour and another interviewing three unseen residents of Storybrooke reacting to all the chaos that keeps coming down around them.

Once Upon a Time: The Complete First Season (Blu-ray Review)