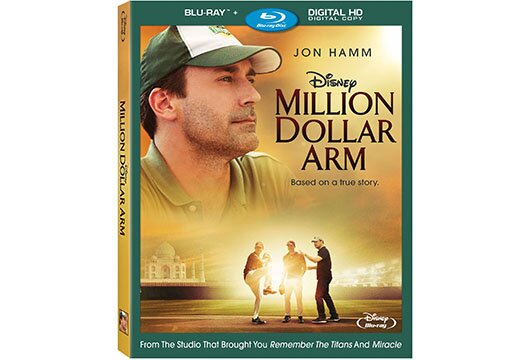 Back in 2002, Disney made a movie called The Rookie, which told the inspiring story of the unlikely rise of a pitcher to play Major League baseball. The film didn’t end with a big game, but with the satisfaction of personal achievement for a man finally realizing a dream.

Now, to understand what kind of sports movie Million Dollar Arm is, imagine if The Rookie ended after the pitcher merely tried out for a professional baseball team. Oh, and it’s mostly set in India.

Million Dollar Arm is the story of a gimmick, a scheme hatched by sports agent J.B. Bernstein (Jon Hamm) to drum up publicity for his failing agency by hosting a talent competition to find potential big league pitchers in India. He’ll bring the top two prospects to America, train them and get them signed with a MLB franchise, making them the first Indian-born athletes to play professionally in North America. Bernstein envisions converting cricket players, but ends up finding two kids who hate cricket and excel in other sports.

Like The Rookie before it, Million Dollar Arm is more about the personalities than the competition, so it’s lucky to have Hamm at the center, bringing all the charisma he regularly infuses into Don Draper on “Mad Men.” The film also finds humor and conflict by leaning on its fish-out-of-water scenario, first with Bernstein in India and then with prospects Rinku (Suraj Sharma of Life of Pi) and Dinesh (Madhur Mittal) once they’re brought to the United States.

Tensions arise from deadlines imposed by Bernstein’s investors. He has six months to get the pair ready for their tryout, but the boys’ coach (Bill Paxton in a very mellow role for him) doesn’t think there’s enough time.

There’s also an easy-to-see-where-this-is-going romantic subplot between Bernstein and the woman (Lake Bell) who rents out his back house.

The film doesn’t try to be anything more than it needs to. The performances are effective and engaging, and the story is charming enough to keep audiences entertained for a couple of hours. The primary appeal will be as a curio to baseball fans but there’s enough international flavor to entice general audiences as well.

The Blu-ray is rather light on extras, with a few very short behind-the-scenes featurettes about the real circumstances upon which the film is based, some deleted scenes and a rather limp alternate ending.