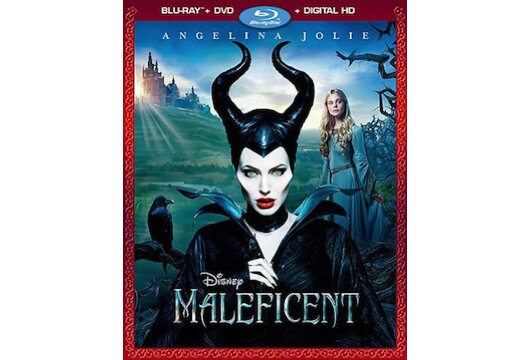 A reimagining of the animated classic Sleeping Beauty by way of Avatar, Maleficent offers fantastic visual splendor but its twist on the timeless tale ultimately proves underwhelming.

This thoroughly modern update recasts the iconic Disney villain in a sympathetic light, presenting her as a woman out for revenge after being betrayed by a man she thought loved her. Angelina Jolie makes for a picture-perfect live-action embodiment of Maleficent, a powerful fairy tasked with protecting a land inhabited by supernatural beings from invasion by the neighboring kingdom of humans. After the king is mortally wounded, he vows to name as his successor whomever can kill Maleficent.

Driven by a thirst for power, the King's servant Stefan (Sharlto Copley) takes advantage of his childhood friendship with Maleficent by drugging her and cutting off her wings, a trophy that earns him the crown. This, in turn, leads Maleficent to curse Stefan's infant daughter, Aurora, to fall into a death-like sleep before her 16th birthday.

The screenwriter, Linda Woolverton, says in the bonus featurettes that a primary motivation for writing the film was the chance to explore what would drive Maleficent to such depths that she'd be willing to condemn a baby. And while the pieces more or less fit into place here, the script takes enough liberties with the original Disney film that the softer edge given to Maleficent detracts a bit from the expectation of delicious wickedness that had been the defining trait of the character. Woolverton drew some inspiration from the original Grimm fairy tale, but otherwise the script owes more to the conventions of big-budget Hollywood fantasy. Kids will feast on the bright colors and gorgeous visual effects, but some of the film's motifs might prove rather dark, especially the rape metaphor that initially sets Maleficent down her dark path.

And then there's a key plot twist that is not only eerily familiar to anyone who has seen Frozen (a coincidence to be sure, but also a bit too close for comfort in terms of the proximity of the two films' release dates) but is practically identical to the resolution of a similar event on the first season of "Once Upon a Time."

But, the film is not without its own sense of fun, finding lighter moments with its spin on the classic characters, like how the three pixies sent to raise Aurora (Elle Fanning) in hiding are bumbling fools whose complete lack of knowledge about childcare is just as likely to doom the princess as Maleficent's curse. In spying on Aurora, Maleficent actually takes a liking to her.

There's an amusing anecdote in the extras about how Jolie, in her Maleficent costume, proved so scary to the children on the set that the only one who could act with her without crying turned out to be her own daughter; that's her as the 4-year-old Aurora hugging Maleficent in the woods. Knowing this certainly helps reinforce the ad hoc mother-daughter relationship that forms the heart of the film.

In total, the Blu-rays five production featurettes run a total of about 25 minutes. The disc also includes about six minutes of deleted scenes, mostly inconsequential stuff delving into character motivations or showcasing unfinished effects sequences that were reconstructed into other scenes.