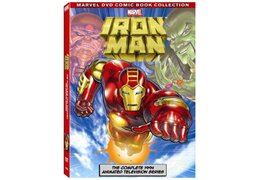 Other than a few tweaks the show is generally true to the origins of Iron Man and his enemies. As the hero team battles the villain team in a new adventure each episode, the show seems more like a throwback to cartoons from the 1980s. Compare it to, say, the current “Iron Man Armored Adventures” series (the first season of which is on DVD from Vivendi), which recasts Iron Man as a teenager to take advantage of the teen hero trend.

By the second of its two seasons, producers re-tooled the format and animation enough that it may as well be a different show, though in either case the animation is lively and representative of the transition from hand-drawn forms to CGI.

Hardcore fanboys and animation buffs will gravitate to this the most. Disney also released DVDs for the 1990s “Fantastic Four” and “X-Men” cartoons.  (X-Men Vol. Five was recently released as well.)